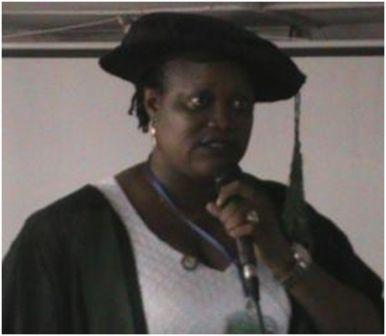 Delivering her statement during the West African College of Nursing Annual General Meeting and Scientific Symposium held at the School of Midwifery, Masuba Makeni, Mrs. Patricia Bah noted that nurses and midwives play a vital role in improving maternal and neonatal health worldwide.

She informed her audience that according to a Report by WHO in 2012, the maternal mortality worldwide has dropped by 47 percent since 1990, adding that this may be attributed to the role midwives play with the provision of an enabling environment.

The West African College of Nursing Chairperson stated that Sierra Leone still register one of the highest maternal mortality of 1,165/100,000 in the world with 40 percent of maternal mortality directly resulting from adolescent pregnancies.

She reiterated that increasing the number of skilled health workers is even more important now that countries are striving towards universal health coverage.

Mrs. Bah reminded all that although some progress has being made to reduce the maternal and infant morbidity and mortality with the implementation of the Free Health Care Initiative, as Fellows much more is expected from them in achieving the aims and objectives of the College which to promote excellence in nursing education- basic and post basic level and maintain the standard of nursing within the sub region.

She reiterated that the College needs to support the Directorate of Nursing Services within the Ministry of Health and Sanitation, their implementing partners in ensuring the provision of quality health care by the nurses and midwives through on the job training, mentorship, monitoring and joint supervision. She said they also need to work with the nursing institutions and colleges to ensure the student nurses are well grounded with basic nursing care to maintain and uphold the possible highest standard of Nursing Education and practice in the interest of the people.

Madam Bah told participants to use the three days to map out the way forward not only in responding to maternal and child health emergencies but change the image of the noble profession.

The Chief Nursing and Midwifery Officer, Matron Hossinatu Kanu said as a college, they are in a journey that started decades ago counting from the first African Commonwealth Nurses Seminar held at the University of Ghana in January 1974 to date.

She informed her audience that the college was established with the belief that it would enhance the education facilities of basic registered nurses training programmes and continuing post basic courses across the sub region.

Matron Kanu told the gathering that Fellows of the college should be highly competent, service-oriented experts in clinical and functional areas of specialization, have an in-depth knowledge and practical skills developed over a minimum period of two years in clinical practice pre-entry to enable them demonstrate a high level of clinical competence, leadership, research and technical expertise.

The Chief Nursing and Midwifery Officer noted that the future of nursing explores how nurses and midwives roles, responsibilities, and education should change significantly to meet the increased demand for care that would be created by health care reform and technological advancement.

She stated that at every health institution, nurses make up the largest segment of the health care workforce, noting that also spend the greatest amount of time in delivering patient care as a profession.

The Past International President of the Wet African College of Nursing, Mrs. Amelia Gabba described the college as one of the constituent college of the West African Health Organization established to promote excellence in nursing education at the basic, post-basic and post graduate levels and maintain the standard of nursing within the sub region.

The college, she told her audience was inaugurated in Banjul, The Gambia on Tuesday April 14, 1981 by His Excellency Mr. Assan Musa Camara, Vice President of The Gambia, adding that 268 Foundation Fellows and five Honourary Fellows were admitted at the inauguration ceremony.

The college she said was established with the belief that this would enhance the education with facilities of basic and post-basic nursing training programmes across the sub region. Mrs. Gabba said there are currently about 2000 Fellows of the West African College of Nursing.

The International Past President said despite the challenges facing the college, their mission to positively impact health, direct nursing and midwifery care, education, research and management of health care research for the benefit of their clients is imperative.

Mrs. Gabba maintained that it is essential that team members know the values and standards of the team and their organizations, and what is expected of them as fellows of the college in attitude, and behavior, honesty, caring and innovations.

Delivering the keynote address on behalf of the Health and Sanitation Minister, the Deputy Provincial Secretary, Mr. Sahr Samuel Matturi described the West African College of Nursing as one of the specialized agencies of the former West African Health Community, and its constitution ratified in 1980 by the Assembly of Health Ministers in Accra, Ghana.

Commenting on this year’s theme: “The Role of Nurses and Midwives in responding to Mother, Newborn and Child Health”, Mr. Matturi said it is timely for nurses and midwives to know the role they play in the care of mothers and newborns and the evidence based strategies they would implement in a bid to contribute to the reduction of the high maternal and newborn deaths that are globally bringing down the image of the country.

He said with the Free Health Care Initiative within the ambit of the President Dr. Ernest Bai Koroma to save the lives of mothers, the newborn and children, he is optimistic that there is light in the tunnel for the reduction of the number of deaths in our vulnerable population. Government and its ;partners, Mr. Matturi said will ensure the success of the strategy for the reduction of maternal, newborn and child health mortality, pointing out that the West African College of Nursing as a pillar towards this approach for the reduction in the rates of morbidity and mortality among women and newborn would help complement the efforts of government. The success he however noted brings upon the availability of skilled and well-motivated health force at every health care delivery facility in the country.

Improving women and children’s health, the Deputy Provincial Secretary reiterated is the national goal of the Health Ministry and the government, confidently attesting into the recent gains made in the effort to improving women’s health in the country.

He described the fellows of the college as a highly competent service oriented expert in clinical public health and functional areas of specialization with an in-depth knowledge and practical skills developed over the years.

Mr. Matturi implored all Fellows of the college to serve as a role model, and other nurses who are not Fellows but care givers to our women and children to be subtle and respectful in the care of the sick, noting that their kind words, gentle hands and compassionate touch are equally therapeutic. “Your humanity which includes understanding and respecting their human rights and dignity” “Nothing will be of any good if you are not being sensitive to the needs of the women’s health”. He re-emphasized.