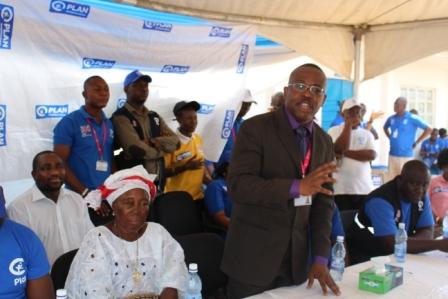 In marking its 40th year of operation in Sierra Leone yesterday, Plan International Sierra Leone has lauded the Sierra Leone ‘Soweis’ Council for its determination to end girl-child genital mutilation in the country.

In his statement, the Country Director of Plan International Sierra Leone, Casely Ato Coleman, thanked the ‘Soweis’ Council for its support to celebrating the organization’s 40 years of  operations in the country, noting that their core objective is to empower women and children in Sierra Leone and across the world.

He disclosed that Plan International is operating in 80 countries the world over.

Mr. Ato Coleman recalled how they have done a lot for women and children in Sierra Leone, including the construction of over one hundred houses in Bo waiting commissioning for specially women and children, donation to the September 9th flood victims in affected areas in the country, construction of Ebola survivor’s camps and the newly constructed building at the Ministry of Social Welfare, Gender and Children’s Affairs.

He said the nature of support put forward by the ‘Soweis’ is an indication that the union between them is strong, hence, the reason why they are committed to do more than before, while he assured them of the organization’s unflinching support.

Speakers of the ‘Soweis Council’ expressed their profound gratitude to Plan International Sierra Leone for empowering them, as well as their willingness to always work with the organization to completely discourage the mutilation of children below 18 years.

The ‘Soweis’ also pleaded with the Fourth Estate and Civil Society Organizations to serve as watchdogs for ‘Soweis’ that will deliberately initiate a girl child before 18 years.

The ‘Soweis’ maintained that they would not sit by and allow Plan International Sierra Leone to celebrate their 40th year of operation in the country alone, noting that their reason for celebrating with them stands indisputable.