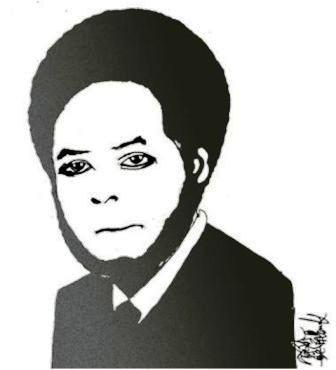 My childhood memories of my father are ephemeral, figuratively speaking. I saw him seldom. Father was a professional commercial driver and so he was always on the road.  (Photo: Pa Hassan Alie Nasralla (1937-2006)

He left the Koyema Secondary Boarding School at Standard II- supposed equivalent of our current JSS II, in structure but not in quality, to join our grandfather at the shop in Fadugu, in the Koinadugu District. Fadugu lies about 52 miles from Makeni and 25 miles to Kabala in the Northern province of Sierra Leone.

Soon grandma and grandpa passed away, respectively, and father took over the running of the he shop as the eldest son. But he was more interested in the transport sector of the business; and so he entrusted the shop in the care of his wives. He drove Fuso and Toyota trucks, transporting produce- palm kernel, for example –from the hinterlands to Freetown and neighboring Guinea.

On the road father was more popular with his Mazda passenger truck which carried the inscription ‘Sama Molloh Transport’ and ND 630 number plate. He was the cautious driver, the proverbial slow but sure; ‘keh tegbeh’ he was fondly called in Temne. ‘What men have done man can still do’ was another popular inscription he carried on his vehicles.

Then it was Sunday, April 12th, 1980; and there was a big storm. Heavy winds blew off the roof of our house and placed it gently on top of a cluster of fruit trees in our backyard. Father was away in Freetown. We were lucky to survive the crash of the shop’s walls. Neighbors who came to our rescue preferred to help themselves with goods from the fallen shelves. By the time the storm quelled down it was dawn and our house was no more.

The family moved to Magburaka the following year, father now with only a Mazda vehicle to supervise. One day, he was involved in an accident which left the vehicle beyond repairs. For months father was to be jobless. Fortunately, or rather unfortunately, he met the famous Fullah business tycoon, Bailor Barrie (late), who credited father a Daihatsu passenger truck under a payment by installment agreement.

And so father was on the road again, but not for long. In the heat of the infamous 1982 general elections, his creditor asked him to transport a group of supporters to Sigunia, beyond Kabala in the Koinadugu district, where his (Barrie’s) brother, Alpha Barrie, was contesting. One good turn deserves another, father felt obliged.

However, several miles into the township, father was attacked by opposing supporters loyal to A.B.M Kamara. The passengers were attacked, tortured, and father’s vehicle was burnt, the carcass of which had been by the roadside until recently.

Father had to walk about eight miles of thick bush to Kabala to escape the wrath of the violent supporters. When he eventually arrived in Magburaka father was a drained man, and the family was in tears like in a funeral.

For the next 25 years or so father was to be jobless. Out of job meant more time for his family. The family settled briefly in Makeni before finally moving to Freetown.

Gradually father was accepting his turn of fortunes as fate, and he courageously tried to turn his back on the immediate past. But as he forged ahead, the road looked so much like the one he had just travelled.

Now that he had time for us, father narrated so many things of his past. He talked of his boarding school days at Koyema Secondary School and made fun of some of his teachers. He mentioned school mates such as Abdul Rahman Dumbuya, Shamsu Deen Sankoh, Joe Amara Bangalie, Lawyer Quee, Alhaji Daramy Rogers, Mr. K. L. Sesay, Amadu Wurie and Ibrahim Durie. He explained how he was man of the match keeping the goal for Koyema against Magburaka Boys Secondary School. However, in one of such inter-sec school encounters he broke his left arm. Dr. Strusciver, the doctor who treated him, gave him the nickname Strusciver.

He recounted Indian movies such as ‘Yeh Vahdaah Rahaa’, ‘Yadonki Baraat’ and ‘Ghazaab’. How he worked briefly with the Indian company, Chanrai, in Freetown.

At some point in his life father was a chain smoker. At another point he was a wise alcoholic- he never actually allowed himself to reach a state of drunkenness. At some other point father was a gambler. He took us to the Strand Cinema and played Jackpot while we watched movies. Sometimes he would lose all the money on him and had to ask his younger brother, Sahid- who ran the cinema’s pub- for poda-poda fare.

Then he fell in love with the national lottery. He would play and play and play and his wives would be angry. I cannot remember how many times we walked from Dan Street in the east end of Freetown to the lottery’s headquarters at Siaka Stevens Street at the center of town to bring him the winning and machine numbers. Sometimes he would buy a couple of books and lied that he was selling for an agent.

One day though, he came close to winning the lottery’s star prize with four numbers (12, 33, 26 and 76) out of the regular five numbers. He won several tickets of two numbers, many of three numbers, and a few of four numbers. And his wives were more than happy.

Father was a polygamous man. He married three native women- Fatu, Mablu (both late)- and Isatu, the youngest. He has 13 children, a couple of whom were born to women out of wedlock. We may not copy his polygamous example but we certainly admired his courage, patience, understanding, tolerance and maturity living peaceably with his three wives under better and difficult conditions. I cannot recall an account where his wives had quarreled with one another, or where father had had cause to beat (or nag) at any of them. The difficult times include, for example, the family living in a little room and parlor apartment at No. 9 Alfred Street, Freetown.

In those times of crisis, his wives had stepped into his shoes with all due respect.

As a family man, father loved his brothers and sisters and the extended families of his wives. He knew the challenges of a polygamous home and he always tried to overcome them.

Father was a good eater, and his wives just as good in the kitchen. He ate greedily, and doing the act surrounded by his wives father was an envy to watch. Very often, however, he would foul the air loudly, after eating to full, to the amusement of his wives.

If eating well was a key to a person’s health and well being, father wouldn’t have fallen ill. His illness started as an occasional hiccup. Then his waist bone; and his legs began to shake under him.

His daughter, Mrs. Hammon Macauley, invited him to London for treatment. When he returned home six months later, father looked hale and hearty. But in less than two months he lapsed into illness again. And he was to be in that condition to the time of his death.

Two weeks to his death, the doctors diagnosed a non-functioning kidney and had already given up on him. When I visited him at his residence at Henry Street, I also knew it was just a matter of time before he gave up the ghost. He lay on a mattress on the floor of his bedroom, shivering and helpless. His eyes were opened but he could not recognize anybody. His mouth hung wide open, but he did not utter a word. Father was to remain like that until the evening of Wednesday 19th April 2006 when he finally gave up the struggle.

Long before his death, father demanded that he be buried in Masumana, the homevillage of his mother Ya Sama Molloh. His demand had been fulfilled.

Like all human beings, father made some mistakes in life. I pray that God continues to help us correct some of those mistakes in honor of him. Father’s greatest regret was his failure to own a house or a piece of land in the capital; a blunder he kept cussing himself for.

However, my own greatest regret is that my father would never be around to bless my marriage and play with my children. I now accept that was how it was meant to be.

Many people will miss Mr. Hassan Alie Nasralla for his kindness and selflessness.

May God have mercy upon him and his children and grant him eternal peaceful rest.

Till we meet again, rest in peace.