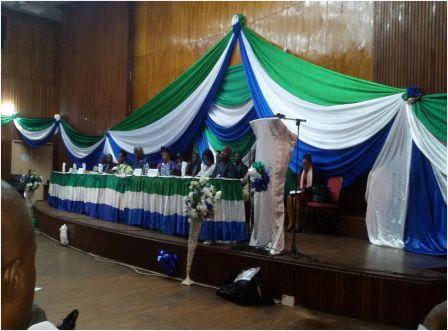 It could be recalled that Madam Mabinty Daramy as Acting Minister of Trade and Industry (now Ambassador to Guinea) presented to Parliament the Bill entitled “The Small and Medium Enterprise Act, 2015” and was passed into an Act of Parliament on 12th November, 2015.

It was against the backdrop that the Ministry developed the two agencies for the implementation of its development followed by statements from various speakers in order to create more significant impacts.

In her statement, Madam Mabinty Daramy stressed that the Agenda for Prosperity is rightly promoting the private sector competitive development, adding that it is also seek opportunities for social and marine development, as well as transportation and several others.

She said there are structures put in place for inspections through support from development partners of the private sector development as several strides have also been made with specific business environment in which the private sector has provided with the two agencies for special benefits that would lead to economic progress.

Madam Mabinty Daramy also said the value addition and supply of an integral to sustain the Small & Medium Enterprise SME development in collaboration with the Local Content Policy provides a lot of facilities with a clear manifestation that encourages infrastructure development to support the trade sector as an engine growth to enhance and promote the private sector development.

Representatives from development partners also congratulated Government for the launch of the two agencies, as well as the business community for the achievement of the two Acts which it described as a significant step towards development.

In another development, the President of Sierra Leone Chamber of Commerce, Mrs. Gladys Strasser-King, has commended the Trade Ministry for the launch of the Two Agencies Acts.