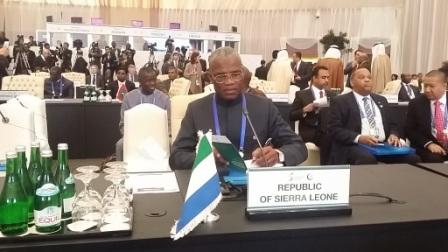 The two-day preparatory meeting is the first ever TICAD to be held on the African Continent – due to be in the Kenyan Capital, Nairobi on August 27 – 28, 2016. The Ministerial segment of TICAD VI is also scheduled to be held in the Islamic Republic of the Gambia on June 1 – 2, 2016.

The meeting focused on the status of implementation of TICAD V including progress of the delivery on commitments toward the six key pillars of the Yokohama Action Plan 2013 – 2017 and, to set out an outline for the Nairobi Declaration going forward in August.

Participants noted achievements such as the enhancing on the education and skills of young African men and women, advances in the promotion of increased rice production under the Coalition for African Rice Development (CARD) initiative and that of regional integration through region-wide transportation and trade corridor development.

They also recognized challenges such as the Ebola virus disease outbreak in the Mano River Basin; the downturn of the international price of primary commodities and the attendant fiscal pressures on many countries; the dependency of most economies on the undiversified primary commodity (extractive) sector and the rising wave of radicalization and acts of terrorism, among others.

Based on lessons learnt from failures of the implementation of ambitious goals and objectives over the years, the Senior Officials, this time round limited TICAD VI priorities to the following three pillars namely: Promoting Structural Economic Transformation through Economic Diversification and Industrialization; Promoting Resilient Health Systems for Quality of Life and Promoting Social Stability for Shared Prosperity.

Sierra Leone’s Minister of Foreign Affairs and International Cooperation, Dr. Samura Kamara who was officially invited to represent Sierra Leone was represented by Sierra Leone’s Envoy to the Kingdom of Saudi Arabia and Permanent Representative to the Organization of Islamic Cooperation (OIC), Alhaji M.S. Kargbo accompanied by Mr. Sulay-Manah Kpukumu, the Minister Counsellor and Head of Chancery at the Sierra Leone Mission in Riyadh.

Speaking shortly before the commencement of the Preparatory Senior Officials’ Meeting, Ambassador Kargbo says Sierra Leone attaches great importance to the meeting and looked forward to Japan’s assistance in the promotion of economic growth in Africa.

He encouraged Japanese companies to expand their businesses in Africa, support the private sector development, Infrastructure and human resources development in the industrial sector in the African continent.

He also encouraged the Japan Export and Trade Organization (JETRO) to hold a Business Forum with the Sierra Leone Investment and Export Promotion Agency (SLIEPA) – a move he says, will help attract many Japanese companies to build a network with Sierra Leonean businesses.

Gender equality is critical to eco...