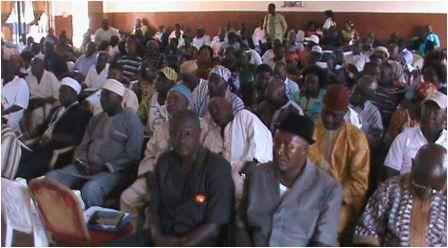 Embracing the initiative with support from the World Bank at a Consultative meeting held in the Kenema District Council hall, all stakeholders commended the Government and the Ministry of Health and Sanitation for revitalizing the decades lost Sanitary Inspection programme with what is now referred to as the Expanded Sanitary Inspection Compliance and Enforcement (ESICOCME) Project.

Delivering his keynote address with a power-point presentation, Health and Sanitation Minister, Dr. Abu Bakarr Fofanah said the Ministry plans to extend pre-hospital care and emergency transportation to the wider population through a service that will include call centre, dispatch and sign post, efficient management of ambulance fleet service to ensure improvement of the emergency units at regional hospitals and other health facilities.

He spoke of the launch of the President’s 2010 Free Health Care Initiative and dilated on two of the key barriers preventing mothers and children under five from accessing health care and health facilities due to cost, pointing out that under the 10-24 months Post-Ebola Recovery Plan, the Ministry plans to increase access to emergency medical care to pregnant women, lactating mothers and children under five as part of the wider efforts to implement President Koroma’s priority to drastically reduce maternal and child mortality in the country.

The President, he told his audience believes in collaboration and consultation as a good and profitable initiative to building a resilient health care delivery system in Sierra Leone. The input of the people the Minister said is critical to both the NEMS and ESICOME systems, adding that the revival of the Public Health Aide or Sanitary Inspector as they used to be called many years ago, with their new skills, training and law enforcement power would bring back the past glory of the culture of hygiene practices in the rural and urban communities. He described the two initiatives as a catalyst own by the people and must be utilize for the desired purpose.

Dr. Fofanah presented the ugly scenery of an ambulance carrying charcoal, while dilating on the misuse of ambulance, footages of lack of maintenance culture and recklessness in handling property meant for the utilization of the country and encouraged Paramount Chiefs, Councilors and the other stakeholders to support the initiative for posterity.

Resident Minister East, Hon. Maya Moiwo Kaikai recount the challenges emanated from the rebel war, the assessment of the missing structures and destruction caused to the nation, which he said President Koroma in his wisdom was able to translate and transform into national development.

He highlighted the development on the current road construction network planned for Kenema townships and Kailahun, and other parts of the country for which he said the government deserves a tap on the back as it leads to the Agenda for prosperity.

Describing the Health Minister as an action-oriented man, the Hon. Resident Minister urged all Paramount Chiefs and Ward Councilors to give him the desired support for the successful implementation of the President’s vision.

The Mayor of Kenema City, His Lordship Joseph Kaifala noted that the fight to promote maternal and child health care still poses a challenge, and highlighted efforts made by the Government to address the situation including the new strategies presented by the Health Minister.

Other highlights include discussions on communication, recruitment of ambulance drivers, nurses, and sanitary inspectors at district and chiefdom level, and interactive session on community ownership of the initiative.

The Kenema meeting is first of the series of Consultative meetings planned for the south and northern regions including the western area.