The Public Relations Officer (PRO) of Sierra Leone Road Safety Authority (SLRSA), Mr. Abdul Karim Dumbuya, has removed the lid over what he considers as a negative sentiment to the brand of the institution’s activities in the public domain.

Recently addressing media practitioners in a news conference at the SLRSA Headquarters on Kissy Road, Freetown, the PRO expressed dismay over what he described as misleading information being circulated by one Mr. Mohamed Conteh trading as ALUMED.

According to the PRO, the information doing the rounds is baseless and unfounded. Mr. Abdul Karim Dumbuya explained that SLRSA made advertisement for the construction of an ultra-modern office at their Africanus Road Branch in Kissy, Freetown, where International Competitive Bidding (ICB) method was fully employed and Mr. Mohamed Conteh was among bidders for the said construction, but his company failed to meet the NRA benchmark.

The PRO disclosed that according to the NRA records, the company did not make tax payment since 2014, adding that the supposed bank guarantor also disassociated himself from Alumed International (SL) Limited, an issue, he said, brought the credibility of the company to question.

The PRO furthered that much to their chagrin, Mr. Mohamed Conteh embarked on a campaign of calumny against the Executive Director of SLRSA, Dr. Sarah Bendu, using both the traditional and social media.

He informed that the media are a key institutional player in holding Government and other institutions accountable to the democratic ideals of transparency and accountability. The stressed that media practitioners should take cognizance of the fact that there are certain ethical and legal considerations that may affect their activities. Media practitioners, he admonished, should operate in tandem with ethical judgment thereby employing the core values of journalism which are fairness, accuracy and objectivity.

Below is the Press Statement and documents that exposed the criminal tendencies of Mr. Mohamed Conteh:

On misleading information being circulated by Mohamed Conteh trading as ALUMED

In August 2014, the Sierra Leone Road Safety Authority, SLRSA, issued out an advert for construction of an ultra-modern office at our Africanus Road Branch in Kissy, Freetown. The procurement unit used the International Competitive Bidding method.

A letter of notification was sent to ALUMED in which the Authority spelt out clearly six conditions to be fulfilled before a contract can be assigned or awarded. ALUMED submitted some of the documents requested and asked for additional time to submit the Performance and Advance Payment Bonds which are very crucial in the procurement process.

The Procurement Committee granted his request. However, in spite of the opportunity given him, he was not able to submit these very important documents. The Authority expressed serious concern to ALUMED over his failure to complete his documentation.

Following this delay, the Authority did some investigations and also discovered that there was no assessment and payment of tax by ALUMED since 2014 to date, a key criterion in any procurement process. However, even though NRA records indicate that ALUMED has not made any tax payment since 2014, yet he produced updated tax clearance, a clear indication of forgery.

In view of the above, the National Public Procumbent Authority (NPPA) was informed about the fake NRA information submitted by ALUMED and non submission of advance payment as requested. The NPPA reviewed relevant documents and correspondences and gave no objection on the termination of the notification of the award letter. On the 10th June 2015, the notification of the award letter issued was terminated and the Evaluation Committee report was revisited.

Although Dr. Sarah Bendu has every right to legal action against the perpetrator of this campaign of calumny, her busy schedule will not allow her to do so. The Sierra Leone Road Safety Authority is putting out this information for public to know the truth and to see how Mr. Conteh’s unscrupulous activities contributed in delaying a very important project which is part of government’s Performance Tracking Table (PTT)and His Excellency’s Agenda for Prosperity.

Above all, it has been further discovered that Mr. Mohamed Conteh (ALUMED) has not got what it takes to undertake such a premier contract based on his character and conduct.

For more information feel free to contact us on the following numbers:

We wish to inform you that we are in receipt of letter dated 29th May, 2015 signed by the Guarantor who deposited his title deeds with the Bank for the issuance of a Performance Bond (guarantee) in favour of the above Company. In that letter, the said Guarantor has clearly indicated that he no longer wishes to serve as Guarantor for the above Company.

TAKE NOTICE that the Bank would no longer be liable should you act on the said Performance Bond. We look forward to your co-operation in this matter.

Your letter dated 18th June, 2015 requesting for verification of tax documents was received on the same date and after going through our records in the Collection and Compliance Monitoring Unit, below is our records’ findings for the following tax payers:

ALUMED International (SL) Limited – No assessment and payment of Corporation tax and other taxes due to the National Revenue Authority was recorded for2014 to date.

For any further information needed relating to payment of taxes to the National Revenue Authority, please visit our office at 19 Wellington Street, Freetown for further clarification.

US supports malaria control in Sie... 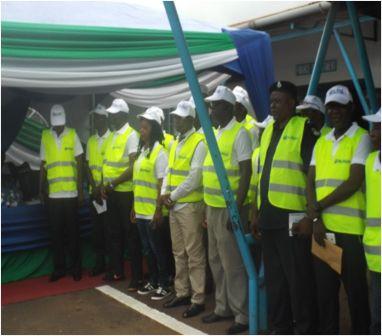