Sierra Leone’s Charge d’Affairs to the People’s Republic of China, has called on the newly elected executive of the Sierra Leone Students Union in China to ensure a strong and dedicated team that will work towards promoting students’ issues and eventually add value to their Union.  (Photo: President Sesay and Vice President Roberts)

Madam Kumba Alice Momoh spoke on Thursday 11th February during a call on the Embassy by the new executive of the Sierra Leone Students Union in China,   elected into office at the end of the student’s Annual Convention in Beijing.

Madam Momoh called on the new executive to utilize the strength of being united and build trust within their team to ensure success in their new assignment, also encouraging them to work towards bringing everybody on board irrespective of how the votes went.

She told them they are in China “to acquire knowledge but it has reached a time that you will be required to make sacrifices in the pursuit of the goals of your Union”.  Madam Momoh said, the challenges faced by the former executive, whom she commended for successfully managing the affairs of the union, could serve as lessons for the new one in their bid to achieve their goals.

Also making a statement was the Embassy’s Head of Chancery, Unisa Sahid Kamara.  He thanked the former executive for the smooth transition, reiterating the need for unity amongst students.

“Lead by example, and ensure you perform to the expectation of the general students’ body in China, but above all don’t forget your studies as that is your primary reason of being here”, he said, expressing concern on reports of how the students had previously misused social media during their campaign.

Responding, President of the Union, Saidu Mohamed Sesay, Masters Candidate in Public Administration at China University of Geosciences, thanked the Embassy for the support always accorded students over the years, with specific reference to their annual convention. “The support and directions the Embassy has been providing to students have been contributing factors to our success over the years.”

Through the Embassy, Sesay paid glowing tribute to the Government of President Ernest Bai Koroma for supporting them especially through the annual provision of allowance of $1,800 per student and 40ft container for the shipment of their personal effects.

On their academic pursuit, the new President promised, students will always put their studies foremost. “We shall remain committed to our academic pursuit so as to impact positively to our country’s growth when we shall have returned.”

On students’ unity, Sesay called on executive members to be united, saying “we may have our differences but they should not affect our coexistence as students”, promising to work closely with the embassy through lobbying and engagement, so as to see how private students could form part of those receiving allowances from the Government back home.

Trust and respect, Sesay said, would be crucial to their success as an executive. “The two are of the same importance for they serve as yardstick for success and progress”

Also making statements were the former President, Adikali Sesay and Secretary General Mohamed Sulaiman Sankoh. Both expressed gratitude to the Embassy for its constant support to students and encouraged the new executive to continue with the cordial ties existing between students and the Embassy. 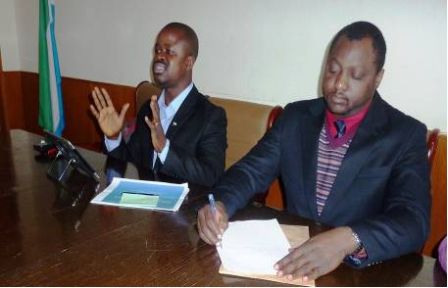