A birthday gift that could change Sierra Leone’s football 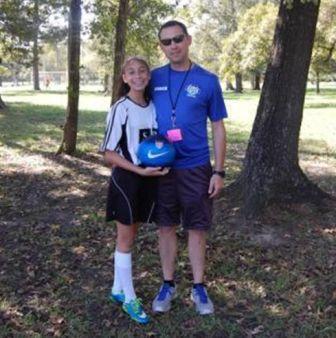 A birthday gift that could change Sierra Leone’s football

Why a 13-year-old American wants to promote Sierra Leone football in a special way?

On her thirteenth birthday, Jackie Kirby made one pledge. It’s got nothing to do with herself or family but rather a distant land she has never been to or heard of few years back. Her contemporaries would have requested new roller skates for their birthday gift but Jackie wants to offer charity. So, what is it that will make a 13-year-old girl want to help Sierra Leone and its football?  (Photo: Jackie during one of her training sessions)

Jackie plays football at Klein Soccer Club which is based in Texas. Klein has been fascinated about the contribution of the Sierra Leonean charity, the Sama Foundation to the education and development of sport for kids in the country. The organisation which is headed by its president Bundu Hayes is a member at Klein and was one of the top journalists and match official that Sierra Leone has produced. This is how Jackie got to know more about football in Sierra Leone and has decided to donate to the Sama Foundation for the benefit of the school children in the country.

“Over the years we learned of the foundation and have contributed individually through Klein Soccer Club” Jason Kirby, the father of Jackie explains.

“When it came time for Jackie’s Bat Mitzvah, it was our first thought for a charity project,” he said.

“…Bat Mitzvah, is a Jewish ceremony when a girl turns 13. They lead the service and read the prayers in Hebrew. The ceremony makes her a full member of the temple and able to participate in all activities”.

“I was very proud of her putting this together. To get donations she, put a box at a Vito’s Famous Pizza, a local restaurant in the in area. Also, we placed a message on the community Facebook page—- At her Bat Mitzvah she gave a speech explaining the Sama Foundation and why she contributed. Bundu was there and accepted the donations and shared the special event with us”Jason added.

The Sama Foundation has been donating football equipment in the country since 2008. The equipment include  boots, footballs, set of jerseys complete with the schools’ crest and even hand sanitation wash.

Jackie admits she knows little about Sierra Leone and that most of it is for the wrong reasons, which explains why she is touched and has decided to contribute to the country’s youth football.

“I know it is in Africa and had many issues including Ebola. Kids are very poor and do not have the money to buy football boots and equipment,” Jackie explains.

Father and daughter have never visited Africa but they share a passion for the game and the talent on the continent.

“I have been playing since I was four and have enjoyed being out on the pitch with my team and friends,” Jackie said.

Jason says her daughter is quite a player but has no plans to go professional.

“She is actually pretty good. She was playing on one of the top teams for the Challenge Soccer Club for many years. She recently went back to the recreational level because she wanted time to try other sports like basketball. Although not as competitive, she is still enjoying being around the game.”

Sierra Leone football is currently in a dire strait. There is a power struggle at the leadership and the national league is now affected by the impasse.

But with assistance from organisations like the Klein Soccer club, Sama Foundation and a young girl in the United States, thinking about the future, it looks like all is not gloom for Sierra Leone football.