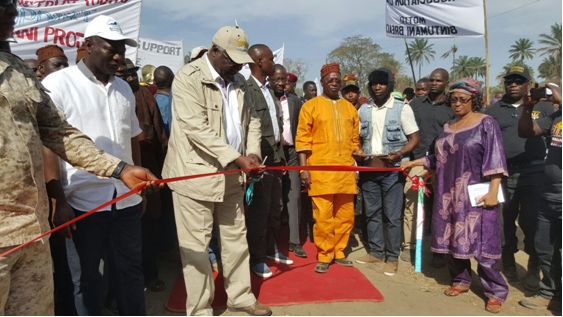 It was a moment of celebration at Mamoria Badela Village in the Koinadugu District where President Dr. Ernest Bai Koroma was joined by senior government officials, the diplomatic community and other personalities to turn the sod for the construction of a bridge linking the Loma Mountain to the rest of the coiuntry. The initiative of “Bridging Bintumani” in Kabala, was born by the Hon. Minister of Finance and Economic Development, Dr. Kaifala Marah. It all started during his service at the Commonwealth Secretariat where Dr. Marah began putting mechanisms in place towards the project. Upon his resignation and subsequent appointment by President Koroma, Dr. Marah used over half of his benefit from his previous job at the Commonwealth Secretariat to buy some of the equipment for the rehabilitation of roads and construction of bridge project.    (Photo: President Koroma cutting the tape whilst Dr. Kaifala Marah looks on )

The river that is about to be bridged is a running river with two different colors (dark and clear) of water with each colour running on its own direction and fishes on each other don’t cross to the other side.

This wonderful river after being bridge would connect Kono district in the East and about 22 other communities within Koinadugu District.

The all-important event on December 29th, 2015 saw the Bridging Bintumani Community (BBC) initiative was commissioned by President Ernest Bai Koroma, in a very colorful occasion at the scene of the proposed bridge.

Dr. Marah in his statement informed the people that he and his family have been working collectively to see through the project. He revealed that descendants of Koinadugu abroad are also contributing to the project as according to him, millions of Leones have been raised towards Bridging Bintumani.

He further expressed thanks and appreciation to the local people who also have been serving as volunteers in the project.

The bridge, Dr. Marsh said will help change the lives of people and boost tourism in the country. He is thankful to God for providing the resources to do the roads in the said community, and that the cost of transportation has been reduced from Le100, 000 to Le15, 000.

The sum of Le250million has been braised by the Diaspora Chapter of BBC in a fundraising dinner organized recently.

The North American Chapter pledged $10, 000 towards the project; whilst the European Chapter has raised 1,200 bags of cement out of 5,000 bags and raised £5,000 for the project. The Acting Tourism Minister, Madam Kadie Sesay; the Deputy Minister of Youth, Feremusu Conteh; the All Peoples Congress Party District Chairman in Koinadugu District, Dr. Fassineh Samura and Paramount Chief Fassalie Marsh III of Neya Chiefdom lauded the project and pledged their support towards it success.

The Koinadugu District Council Chairman, Mr. Sheku Kamara said the project will bring relief to Council because it will ease access for the supply of services to 22 communities.

Delivering the keynote address, President Dr. Ernest Bai Koroma thanked Dr. Marah for a very timely initiative and described the entire project as a national project and that collective efforts must be put in place to complete this wonderful project. Government, he said will facilitate the construction of a first class road to be joined with the bridge project.

President Koroma also thanked the community people that are serving as volunteers to continue their efforts. He called on the people of Koinadugu to take advantage of the project and promised to engage with the district politicians towards the project. The program was climaxed with the turning of the sod by the President.   Apart from the project “Brdging Bintumani, Dr. Marah has also been involved in many other infrastructural projects such as roads, community centers, schools etc. 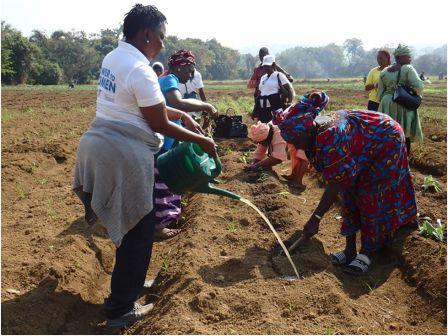 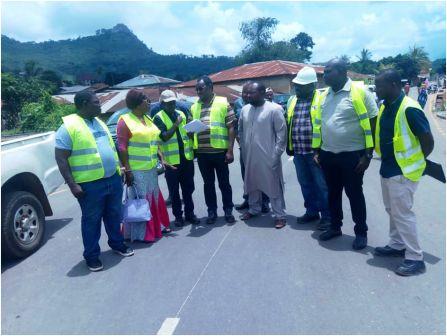 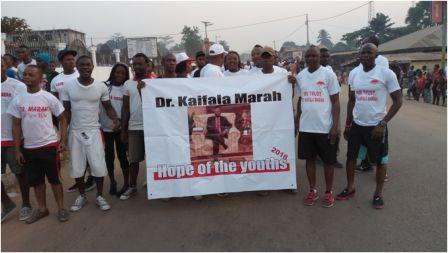