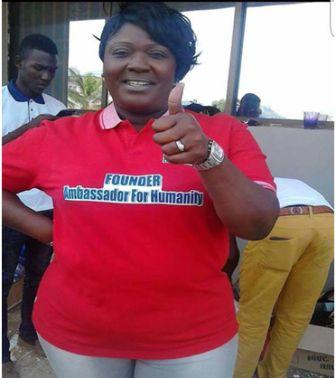 She made this donation at a New Year’s party she organized for children with disabilities at the Shangri La Entertainment Complex at Lumley in the west of Freetown.

Friends and family members of Madam Farella Ryan-Coker also made good will donations and pledges to these less privileged children.

According to the Madam Farella Ryan-Coker, in order to garner resources to support less privileged pupils in Sierra Leone, she recently organized a fund raising programme in the United Kingdom which she said did not raise the amount of money she had targeted to raise.

“However, when I came back home I visited places like Cheshire and I was touched by the poor living conditions of these disabled children, so I decided to put my own resources together to organize such a programme and make this kind of donation to them,’’ she explained.

She further stated that she organized the party to make the disabled children feel happy. She said the money she donated is meant to renovate one of the buildings at the Freetown Cheshire Home and also to improve some other basic facilities for the children.

“I have the Freetown Cheshire Home at heart, and I will always be there to care for its well being,’’ she promised.

In his statement, the Chairman of Freetown Cheshire Home Management Committee, Dr. Abdulai Dumbuya, gave a brief background of the Cheshire Home and thanked the Madam Coker for the help.

He described the donation as a laudable gesture, adding that they will ensure to utilize the money donated for its intended purpose.

“The donation came at the right time, a time in which the Cheshire Home is faced with so many challenges including lack of enough furniture and other facilities,” said Dr. Dumbuya.

He noted that they are putting modalities in place to improve the Freetown Cheshire Home. He appealed to people of good will to follow the footsteps of Madam Coker.

One of the beneficiaries, Miss Kadiatu Mansary, expressed kind appreciation to the Madam Coker for the assistance. She appealed to other individuals and organizations with the resources to extend helping hands to them.