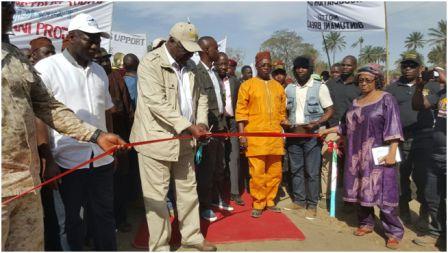 President Dr. Ernest Bai Koroma on Monday, 28th December, 2015 paid a four-day visit to the Koinadugu District in the Northern Region of the country.

The delegation was received in the evening by the Minister of State North and other dignitaries from the district three miles off the district headquarter town of Kabala.

While in Koinadugu District, President Dr. Ernest Bai Koroma turned the sod for the construction of a bridge linking the Bintumani communities, commissioned the Kabala Clock Tower and Central Mosque, inspected the ruling All People’s Congress (APC) Party office in Kabala and a school in the Wara Wara Yagala Chiefdom, as well as commissioned a newly constructed Court Barray in Kanuka, also in the Wara Wara Yagala Chiefdom. He also commissioned the Presidential Lodge in Kabala.

Addressing a mammoth crowd during the turning of the sod ceremony at Momoria Badala, forty miles off Kabala, President Dr. Ernest Bai Koroma thanked the people of Koinadugu District for their efforts and support towards the project and for ending the Ebola.

The President said the Bintumani Bridge will benefit twenty-two (22) communities, provide access to markets, schools, hospitals and clinics, promote agriculture, and enhance economic and social activities of the district.

He noted that the Bintumani Peak is the highest peak in West Africa which Sierra Leoneans should work together and promote to become a local and international tourist site.

President Dr. Ernest Bai Koroma described Bintumani as a gift to the country while noting that exploring potential tourist site will only be enhanced after the construction of the bridge.

The President registered Government’s determination to see the project completed while commending the effort of the Minister of Finance and Economic Development, Dr. Kelfala Marah, in initiating the project.

He urged the community to take local ownership of the project and monitor the implementation of development programmes across the district.

President Koroma stated that the post-Ebola recovery programme is geared towards strengthening agriculture, the health sector, education, survivors and to put the economy back on its feet.

The President reiterated that the community and the local authorities must take leadership roles of any project being implemented in their respective communities.

“We must ensure that work is done and make sure that the resources allocated for any development project are reflected in the implementation of the project,” he stressed.

President Koroma added that Government will continue to engage communities and start on-the-spot visit to districts and chiefdoms.

The Minister of Finance and Economic Development, Dr. Kelfala Marah, who is the brain behind the project, said the presence of President Koroma in their district is a light to bridging the Bintumani communities.

Dr. Kelfala Marah informed the audience that there are non-Sierra Leoneans involved in the project work and that the construction of the road leading to the project site was done through collaborative efforts from him, Salini Construction Company (SALCOST) and other organizations and individuals.

The Minister expressed thanks to all for the great effort and emphasized that community engagement and involvement is central to the success of the project.

In a related development, President Koroma expressed satisfaction with the development projects the indigenes of Koinadugu are undertaking in their district.

He thanked the Chairman of NATCOM, Mr. Momoh Konte, for his effort in the transformation of the district.

President Koroma also commended the people of the district for their spirit of collaboration and healthy competition, and encouraged others to emulate their good example to develop their own districts.

Mr. Momoh Konte described the ongoing competition among stakeholders to contribute to the development of their district as positive competition.

He informed the audience of the arrival of solar light to light up the Clock Tower area as well as the Kabala Township. 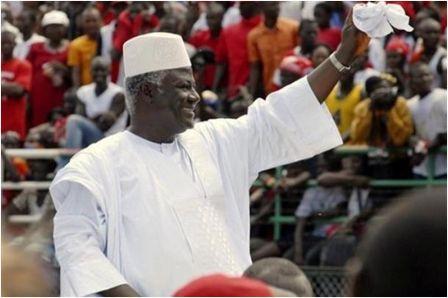