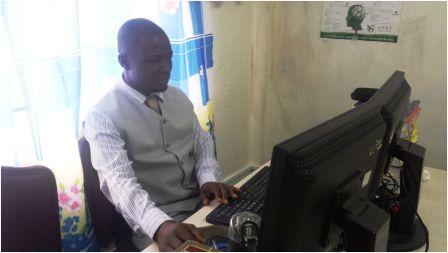 In an exclusive interview on Thursday, December 31st 2015 at his 19 Rawdon Street Office in Freetown, Mr. Osman Mansaray disclosed that as an Internet expert he has carried out surveys and discovered that Sierra Leone completely lacks Internet security systems and as such people using the Internet in the country are exposed to a lot of threats from activities of hackers, blackmailers, disgruntled employees, Cyber criminals, Cyber terrorists and Cyber espionage.

Mr. Mansaray also disclosed that further research has revealed that even though Cyber-crime is been committed in the country the victims are reluctant to report for obvious reasons.

He stated that as a professional Internet expert he decided to set up his business in May last year in order to address these very serious problems.

According to Mr. Mansaray, Cyber Team has set up two laboratories to perform Penetration Testing and Forensics.

He dilated that Penetration Testing means to test network systems for vulnerabilities before they can be exploited by cyber criminals, while the Computer Forensics is to aid law enforcement agencies to investigate and prosecute Computer related crimes.

Mr. Mansaray also disclosed that they are working in partnership with the Government of Sierra Leone to secure the nation’s cyber space.

Cyber Team has a team of highly trained and qualified ICT Engineers in Networking and Cyber Security spanning across four countries, namely Sierra Leone, England, Senegal and The Gambia.

Mr. Osman Mansaray left Sierra Leone for the United Kingdom in 2002 where he studied Computer Systems and Networking, and holds a Masters Degree in Engineering. He also studied Cyber Security and Forensics

Mr. Mansaray who says that Computer security is his hobby, is married and has two children.

‘I am leaving but not gone from th...

‘President Koroma is Champion of i...