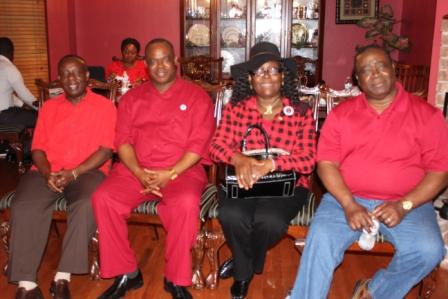 Texas, U.S.A: December 6, 2015. After almost six weeks of exciting and memorable stint with the All Peoples Congress Social and Cultural group (APC-SC) in Dallas, Texas, Mr. Sheik Daboh bids adieu to the Director & second in command, Attitudinal and Behavioral Change (ABC), Ms. Nanette Thomas when she was returning home from the United States.

Mr. Sheik Daboh is the president of APC-SC Dallas since two years ago when he took over the gavel from Mr. Cornelius McCarthy. Many members of that community believe that Mr. Daboh had covered a good part of the history of the chapter which Nanette Thomas had lifted to the highest esteem before she departed home to take up the position of what she is doing now.

Upon her arrival in the United Stated on the final week of October, Ms. Thomas avail herself of the opportunity to attend the monthly meeting of APC Dallas where many of her comrades, including the founder of the chapter, Mr. Sheku Tejan Korma, and her associates in the metropolitan cities of Dallas Fort-Worth, expresses warm welcome, good wishes and affection for her.

Ms. Thomas was also allowed to speak on the occasion of the annual Thanksgiving service of Krio Descendant Union (KDU). She informed the KDU members that, even though the memory of the Ebola epidemic that touched every aspect of societies in our country is poignant, the government is doing progress in restoring and reestablishing the good repetition the country has before the Ebola struck. She commended president Koroma saying that the president is a man in our midst who endow with relentless courage, vision and perform faithfully in our nation.

Earlier in the meeting of APC Dallas, Mr. Daboh informed members that Ms. Thomas’s visit was beyond what is usual and that the chapter will continue to honor her as a former president who made significant impact to the chapter. The APC-SC Dallas will continue to miss the enthusiasm and perseverance of the ABC Second in command, he said. Members of the group, however, believe that Ms. Thomas shared a special bond with not only the chapter members, also with the entire community in Dallas Fort-worth.

Mr. Sheik Daboh, in an interview with the Texas Chief, said that Ms. Thomas’s exalted position during her tenure, however, was not left long un-assailed. We will continue the flame burning here in Dallas where the community is predominantly from the opposition side and will to ensure that the APC rules forever, Sheik said.

The ABC Chief left the shores of the United States on November 30, and she has resumed her office soon as she arrived in Freetown. She sent in abundance message to the various communications network in Dallas thanking everyone for usher her good hospitality during her stay.