The Constitutional Review Process: An imbroglio or a milestone? 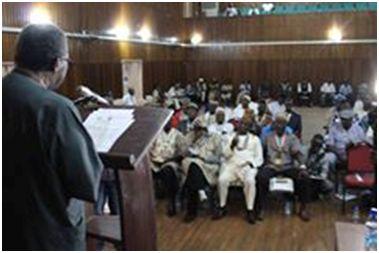 The Constitutional Review Process: An imbroglio or a milestone?

The history of nations; remote and recent, is replete with numerous events where on rare occasions citizens have been asked to make decisions that had greater significance and far reaching impacts on their present and future generations. Similarly, Sierra Leone over the years, have had situations where the citizens were asked to make important political decisions. For example, the 1960 Independence, 1971 Republican, 1978 One Party and the 1991 Constitutions that ushered in multi-party democracy. In all of these processes there were not enough public consultations to get the views of the people as to what should or should not be included in these Constitutions. But this is what sets apart the current 2014-16 constitutional review process from its predecessors by being accessible, inclusive and transparent. Without prejudice, the purpose of this op-ed is to show the legal machinations in the Constitution with the potential combustible to affect our national security.

The questions as to why we are reviewing the 1991 Constitution and what needs to be reviewed are relevant and providing answers are baffling. Mindful that one cannot be an island in a million of seas as one would be flooded will not prevent me to say that the Constitution is not in dire need of review as believed. It may not be accepted by many and was perhaps a ploy by the establishment to exploit the legal gaps to stay in power. Significantly, the problem is that we have not been able as citizens to demand our rights by challenging public, private institutions and individuals in the courts because of perceived (real) lack of independence, huge legal costs, and slowness of the trials.

It is a fact that no Constitution is able to fulfill all the aspirations of its people. Listening to some of the position papers; for instance, the legalization of cannabis sativa, with all respect to its consumers, is not only hilarious but worrying (in fact smoking is a habit and not a right that needs legal protection). We cannot allow our new Constitution to condescend to such banality as to have everything enshrined on it; some of which could be better addressed by other statutory provisions or legislations. I am not a soothsayer to know that cracks will later appear as to what should be reviewed. It is made worse as most of us are not well informed about the issues in the Constitution to be addressed in the new Constitution.

Interestingly, it is sometimes far better to have a power and NOT use it, than needing one and NOT having it. This brings me to the other quixotic national concern- reducing the powers of the President. The tricky aspect with laws is their interpretation as we saw in the recent Supreme Court case between the then VP Sumana and President Koroma. It is universally accepted that killing another human being is unlawful but killing is sanctioned in certain circumstances. Apologies for the digression. Even how best we try to write laws to control the powers of the President, there will still remain a space with the authority to act beyond his/her confined powers. Often in politics, they say sovereignty belongs to the people- we need the power-but people do not have it to prevent the use of the President’s reduced authority.

Perhaps, the controversial aspect of the constitutional review consultations is the great hue and cry about the probable third term move for the president. Again, it is worth pointing out this is not new and we must understand that the quest to stay longer than required in power is a universal trait, which only a strong Constitution can prevent. A few historic examples would shed light on this. In the USA, some presidents attempted third term after their second term. Many like Ulysses Grant (1877), Grover Cleveland (1896), Theodore Roosevelt (1912), and Woodrow Wilson (1920) failed. Unlike the others, President Franklyn D. Roosevelt became the first and last US president, who successfully ran and won four consecutive term elections but later died in office after winning the 2nd World War (1932-1945). Oddly, since a presidential term limit was not clear in the US Constitution, and to prevent the situation where a President might legally machinate the statutory interpretation, Congress made an amendment (22nd Amendment) in 1947, which was overwhelmingly voted for by 36 of the previous 48 states in 1957 to set a specific term limit to the office of an elected President to two terms, whether consecutive or not.

Coming back to Sierra Leone, when the wheels of constitutional review train began its journey many were quick to jump on board without thinking about the destination and ramifications. And now that we have gone so far, it is important to bear in mind certain intended and unintended outcomes we should be ready to face. Democracy is a government of elections, representation, consent and consultation. Being what it is, it can be juxtaposed with protection of fundamental values through entrenched provisions, which are not done piecemeal but progressively. Entrenched clause needs less elucidation as many brighter minds have touched on it in their writings, comments and position papers. Although entrenched clauses make it harder for a Constitution to be changed by a simple vote in parliament, unless by a general referendum, it does not AND CANNOT ALWAYS PREVENT IT. Thus, the reason they are put to a national vote for the people to decide.

We are a nation on edge because except otherwise the tipping point in the current debate is found in sections 46 and 108 (3) respectively of the Constitution. S.46 reads no person shall hold office as President for more than two terms of five years each, whether or not the terms are consecutive. S.108 (3) –(paraphrase)- a bill which intends to have a new Constitution or change any of the entrenched provisions in this section, Chapter III (fundamental human rights) and sections 46, 56, 72, and the others listed …, should not be submitted to the President for his approval, until Parliament approves it after it has been submitted to and been approved at a referendum.

One does not need a legal mind to understand s.46 is entrenched and clear about term limit but juxtaposing it with s.108 is where the trick hides. The other entrenched provisions mentioned are not really contentious or being taken note of. For example s.56 (office of the VP), s.72 (Chieftaincy), s.73 (composition parliament), s.105 (supreme law making authority of parliament), s.131 (composition of the High court), s.140 (Justice and Legal Service Commission), s.167 (establishment of Defence Council), and any of these provisions can only be changed in a referendum.

Having said that it is possible that s.46 can be manipulated through s.108 (3). Given s46 with the others highlighted are entrenched, I need to be convinced by a sound and pragmatic legal opinion as to why it should not be included in the current review process. Let us tease out and accept the framers of the Constitution did not intend that an incumbent President should benefit from a referendum to change the two terms limit, but nowhere also in the Constitution does it bar the incumbent from a referendum on changing the term limit. For parliament, s.85 (1) provides that Parliament shall stand dissolved at the expiration of a period of five years, commencing from the date of its first sitting after a general election. But it could be extended only in public emergency for not more than six months. Now that the public emergency during the Ebola outbreak has ended; it did not prevent both the parliament and government from working, thus it makes no point to argue for more time.

Finally, having scratched the escape surface in some of our constitutional provisions, I am not suggesting that President Koroma should seek another term and may be wrong to say he is thinking about it. We need to put aside every conspiracy theory or wild guessing as to the intent of the government because as a nation, we are at a cross road, and it is proper we do not make a mess but good use of this rare opportunity to review; if any, some of the things we hope to change. And let me hasten to say instead of having the presidential term limit as an entrenched provision in s.108 (3), which could be subject to manipulation, we better remove it from that section and have it only in s.46 without any further legal nuance( i.e. two terms of five years each, whether consecutive or not). As Walter Lippmann noted ‘a man has honor if he holds himself to an ideal of conduct though it is inconvenient, unprofitable, or dangerous to do so’. This cannot be more profound, and let’s hope that President Koroma resists the temptation to extend his stay. Sadly, if he does not, I will not blame him for what is ashamedly authorized by the very Constitution, which protects our rights and provides for the referendum.

By Moses Massa, December 4,2015 : Moses Massa is a Senior Chevening Fellow on Conflict Prevention and Resolution

Constitutional review process must be ow...