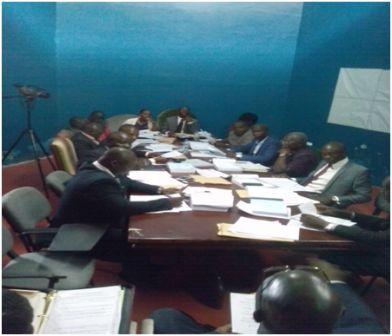 The first session consisted of presentations by the Permanent Secretary of the Ministry of mines and mineral Resources, Madam Fatmata S. Gibrill on the rationale for the 2016 budget strategic plans followed by the Board Chairman of the Income Board Affiliate Commission, Barrister at Law and Solicitor of the High Court of Sierra Leone, Mr. James M. Fornah-Sesay Eqs, the Ministry of Lands Housing and Country Planning.

Hon. Amadu Manu further encouraged his colleagues to be more proactive by not only asking questions based on the report but also look out of the report on the specificssubjects dealing with the challenges on the ongoing Parliamentary hearings and determine the implications for the proceedings to achieve their objectives.

He further stated that as Members of Parliament, they have the constitutional mandate to investigate queries as well as comments raised by and from the public in order to ascertain information presented in Parliament for the 2016 budget approval were correct as well as well been utilized for its intended purposes.

He allayed the fears of the MDAs by saying that MP’s were in no way trying to intimidating them nor impinge on their integrity but put the records straight for the growth of the nation.

He cautioned and instructed the representatives of the Income Board Affiliate Commission Chairman Barrister James M. Fornah Sesay to furnish the Committee with all relevant documents in order to ascertain their reports are true including taxation, as well as other comprehensive supporting documents purporting what has been spent on overseas traveling trips.

Hon. Kanu also ordered the Ministry of Lands Housing and Country Planning to report on how they spent over thirty four million Leones on computers and computer accessories, photo copying as well as printing machines.

He said they should submit their report not later than Wednesday, 25th November, 2015 at 12:00 pm for external oversight functions.

The Deputy Chairperson of the Committee, Hon. Rosaline Jariatu Smith representing Constituency 103 in the Western Urban Area commended the team from the Ministry of Lands for being on time.

She urged them to improve proper monitoring mechanisms put in place to promote taxation for employers, stating that the 2016 national budget needs to have enough funding in order to be able to implement its goals including explorations and anti-fiscal fishing exercises.

The Permanent Secretary in the Ministry of Mines and Mineral Resources explained about the past and current activities on the basis of which they spent the 2015 budget allocation, noting that they judiciously utilized the funds for their intended purpose.

Madam Nancy Tengbeh, the Permanent Secretary of the Ministry of Lands, Housing and Country Planning, gave an overview of the Ministry’s report, maintaining that they have been managing their resources to maintain their integrity.

Chairman Barrister James Fornah Sesay informed the Committee that since he assumed office he has not seen any tangible development in the Ministries that  Sierra Leoneans could write home about.