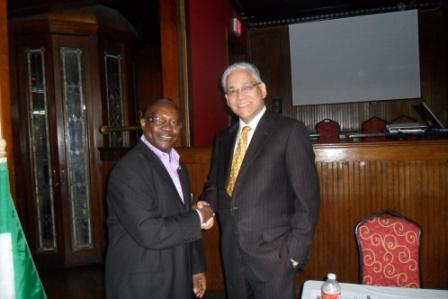 November 10, 2015: Dallas-Texas.  The swearing-in ceremony was held at the Sierra Leone Embassy in Washington District Columbia on November 6 this year by Mr. Patrick Jackson when he took an oath of office as Honorary Consul serving Texas and the surrounding states in the United States.  Mr. Jackson took his affirmation before His Excellency, the Ambassador of Sierra Leone to the United States Mr. Bockari Stevens.

Other dignitaries witnessed the swearing-in ceremony including the deputy chief of mission, Ambassador Sorie Conteh, the Head of Chancery, Mrs. Isha Sillah, and the Information attaché Mr. Pasco Gerald Temple.

Mr. Patrick Jackson will replace his predecessor, Mr. Reginald Spiller, an African American who was the first Honorary Consul to represent Sierra Leone in Texas. Mr. Spiller was among the four Honorary Consuls that President Ernest Koroma necessitated in expanding the Sierra Leone mission across the United States. Texas is the second largest state in the U.S and is the fastest growing immigrants from Sierra Leone.

The new Consulate General’s duties and responsibilities as described are to provide a more accessible and responsive service to Sierra Leoneans and other nationals. He will act as a link between local institutions and businesses in America, helping to develop cooperation and joint working partnership between commercial and non-commercial organizations.

Ambassador Stevens portrays Mr. Jackson as fitting the ideal for an honorary consul who will perform the duties and responsibilities on the classical activities such as visa functions, citizen services, representation, and tourism; issues of trade, investment and promotions.  The Ambassador further added that it is a great satisfaction to the Embassy to have Mr. Jackson as part of an entourage to welcome His Excellency, President Ernest Koroma whenever he is visiting the United States.

Honorary Consul Jackson will take pride for this appointment in the fact that his faithful performance and active role to the Sierra Leonean community at Dallas Fort Worth in Texas has contributed much in maintaining the people’s respect for representing Sierra Leone in the second largest state in America.

The newly appointed consul holds a Master’s Degree in Engineering from the Oklahoma State University. Mr. Jackson became the first African to be elected as a council member in the city of Rowlett where he also rose to a position as Deputy Mayor.

Please allow me to read one of my favorite bible verses as part of my address, will be based the teaching, it is taken from James 1 verses 2-5

I will like to start  by thanking Almighty God, my father the creator for travelling mercies, his grace, his blessing and good health.

I thank His Excellency the President of Sierra Leone, Dr Ernest Bai Koroma for his confidence and trust he repose on me.  I will also like to thank our Ambassador, His Excellency Mr. Bokari Stevens for the recommendation and trust he bestowed in me that I am the right person for the position at this time. I thank you Sir from the bottom of my heart and appreciate you.

To all of you who present here today, I thank you all for taking time off your busy schedules to come and grace this occasion.  My family and I do appreciate each one of you present here today “thanks very much”.

Lastly by no means the least, I need to thank my dear wife, Emily Jackson, for standing by me all these years and for her encouragement and support. Darling I thank you very much.

His Excellency Ambassador Stevens, distinguished guest, I am here for the purpose of accepting the position as Honorary Consul General representing my own country in the state of Texas where I have also lived for several years. To take this oath of office as Consul General is a solemn occasion for me and my family.

Ambassador Stevens, I am aware that the responsibility of directing the affairs of this great order is never to be taken lightly. Therefore I am alert to the duty I owe my country, the president his Excellency Dr Ernest Bai Koroma and all Sierra Leoneans in Texas and surrounding State.

I fully understand that the office of the Honorary Consul in the United States requires a person of experience, ability, fortitude, with knowledge of life, and above all a passion to promote the cultural heritage of my country, Sierra Leone.

Before this day, I am always aware that this position is not a paid job as recognized by the international law, however, as patriotic Sierra Leonean, I am always looking for an opportunity to serve my country and this is just part of my continuation to execute my duty as a citizen of Sierra Leone.

Texas is the second largest state in the US, and appointing me to represent Sierra Leone in that state as Honorary Consul inspires me to perform the duties not limited to, enhancing bilateral relations in trade, economy, culture and science between the State Of Texas and Sierra Leone.

I will work with the Embassy here in Washington DC in trying to help economic and trade cooperation and with expansion of business from Sierra Leone. Another function I intend to perform is to take up the task supporting the development of international relations, the representation and perception of the interests of Sierra Leoneans in Texas.

His Excellency Sir, just to share with you, even though that I have been in the United States for several years, I always put forth my passion and love for my country Sierra Leone. I am presently the President of the Krio Descendant Union-KDU and former KDU Global Chairman of the same Group. I am an executive member of the newly established non-profit Association of Sierra Leonean Organizations in Texas-ASLOT. This organization has been effective partnership with     Restore Hope, the non-governmental organization that was very active in fighting the Ebola epidemic.

If I can recall, His Excellency Ambassador Stevens, during my victory election as a City Counselor in the City of Rowlett, you sent a representative in 2007 to witness my oath of office as a City Council member. The position bestowed me the first Sierra Leonean, even the first African and first non-American born to be part of a Legislative Council in the City of Rowlett. I am indeed as humble as I am proud of you to recommend me to the President and to confer upon me the first Sierra Leonean Honorary Consul in Texas.

Let me assure you that I will maintain the highest standards of conduct in the performance of my functions as Honorary Consul, and I solemnly promise you and His Excellency, Dr. Ernest Koroma that my devotion is to you and the Citizens of Sierra Leone.

Finally, let me say without hesitation that I accept this great honor. I accept it with pride and gratitude and a full heart. Most of all, I thank you for the confidence you express in me and that which you transfer to His Excellency President Ernest Bai Koroma. Today, I thank you in words, after today, I hope to translate my appreciation into deeds and conduct. With the help of God, I shall strive to be capable, conscientious and humble Honorary Consul.

I pledge to all of you that I will do everything in my power to fulfill the oath I have just taken.

Status of Emergency Obstetric and... 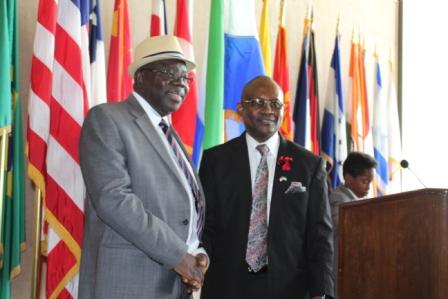