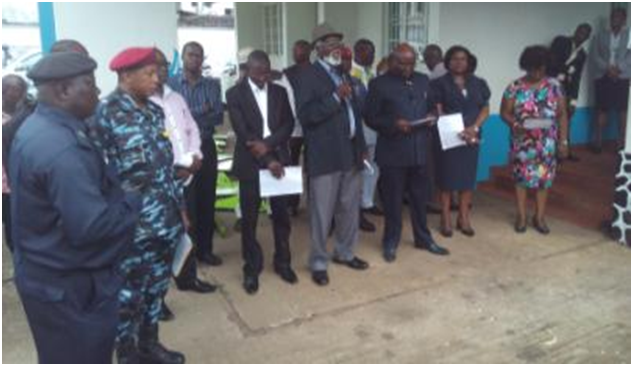 It can be recalled that the Sierra Leone Road Safety Authority (SLRSA) put out a public notice informing the public to clear abandoned vehicles, stop the operations of illegal garages and stop illegal parking of vehicles. Those who treated the notice with levity are now feeling the pinch under the “Operation Clean up for Road Safety”. The Operation was launched on Monday 9th November 2015 at the SLRSA Headquarters in Freetown.

SLRSA’s Public Relations Officer, Abdul Karim Dumbuya who made declaration of purpose stated that SLRSA has the mandate to register all garages, driving schools, spare part dealers etc. “We have noticed that lots of garages are operating illegally, thereby causing vehicles to park on the main streets obstructing traffic,” he said, and added that they are out in full force and with the political will to get rid of vehicles that are obstructing traffic and close down illegal garages.

The Minister of Transport and Aviation, Leonard Balogun Koroma said road safety issues are related to the lives of people. He noted that the illegal operations of unregistered garages are causing lawlessness. Abandon vehicles, he said are used as brothels by criminals to embark on robbery and other anti-social activities that disturbs the peace of the people. “The operation is timely. We want all illegal garages closed and abandoned vehicles towed,” says the Transport Minister, and suggested that volunteers be recruited for monitoring after the operation so that those garages closed down are not open. He advised SLRSA to get a crusher so as to save the pain of towing vehicles to be destroyed manually.

Police, Traffic Wardens among other on the operation at Regent Street

Mr. Koroma also admonished the institution to have a parking system in place that generates revenue and bring sanity top the road safety sector.

SLRSA’s Executive Director, Dr. Sarah Finda Bendu said she has been longing for such an operation to enforce road safety laws. Most of the accidents in the city, she said are due to abandoned vehicles parked on the streets. She further revealed that some registered garages are not operating within the ambit of the law as they are using the streets to repair vehicles. “We want to enjoy Christmas on clean streets. We cannot allow abandoned vehicles to obstruct our movements,” she said. Dr. Bendu called on the public to call her institution’s toll free line 2244 to report issues of illegal garages, illegal parking on the streets and abandoned vehicles.

The Regional Police Commander in the Western Area, Chief Superintendent Augustine .M. Kaillie said those executing the operation must be vigilant, professional and give deaf ears to insults and other odd behavior from the various areas they are going to target.

Speaker after speaker expressed nice sentiments about the operation and pledged their fullest support to ensure that it succeeds. They are the Deputy Chief Administrator of Freetown City Council Mohamed A.S. Koroma; Alphonso Manley of Civil Rights Coalition; Valicious Cole of Sierra Leone Roads Authority, and Board Chairman of SLRSA Reverend Michael Samura.

Superintendent Sovoula, national Traffic Coordinator said “Go ye and do what the Lord requires you to do.”