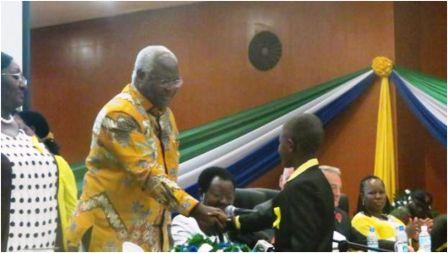 Sierra Leone’s Ebola outbreak has officially been declared over – or ‘don don’ in Sierra Leonean Krio – after the World Health Organization presided over a ceremony to mark 42 days since the last case.

FREETOWN – On Saturday, the World Health Organization (WHO) declared Sierra Leone officially Ebola-free, at a ceremony held in the capital, Freetown. It followed an all-night vigil underneath the city’s famous Cotton Tree, and dancing as the clock turned midnight.

The country now enters a 90-day period of enhanced surveillance, including ongoing blood test procedures and swab tests from any suspected cases of Ebola.

With a smiling face, Victoria Yealia, believed to be the first survivor of the virus, was among those to speak at the ceremony.

“I am happy, as the first survivor this is a day I will never forget,” she said, “I am happy that Ebola is finished in my country.”

Yealia lost both of her parents to Ebola, and many other members of her extended family in Kailahun, Sierra Leone. After surviving the virus she became pregnant and gave birth to a child named after President Ernest Bai Koroma. The baby died within weeks of his birth.

“I wish my child could have survived to see this day,” Yealia added. “Even though am happy, I will still mourn him and the rest of my family.”

Yusuf Koroma, a survivor who worked as a volunteer at Freetown’s Connaught Hospital, also attended the ceremony. He lost his father, the breadwinner of a family of 20.

“As a volunteer in this fight I feel relieved,” Koroma said. “But as a survivor who lost almost everyone in my family, I am in deep sorrow and I will just pray and reflect on this day. There’s nothing to celebrate.”

Another survivor, 13 year-old Mohamed Koroma, sung a track entitled “I am a survivor,” focused on the devastating impact of stigma among those who recovered from the virus.

“I am a survivor; I lost my parents and the struggle to get through Ebola is never easy, which is why people should accept us instead of running away from us,” Koroma said.

An estimated 4,000 Ebola survivors have been registered by the government of Sierra Leone. Many of them suffer health complications and are in need of social support.

SLRSA responsible for the registra...