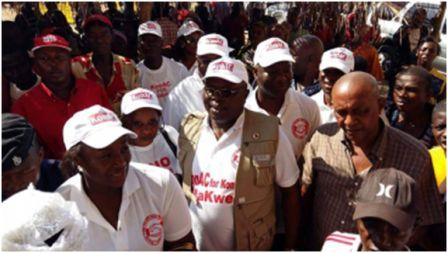 The delegation was received at Bumpeh, Nimiyama Chiefdom by a large crowd of jubilant supporters who sang songs praising

Dianna Konomanias their leader and redeemer.

At Bumpeh Town, the people forced Hon. Konomani to alight her vehicle to process with them to Koidu Town to the applause and admiration of onlookers.

Some people compared the event to the day Government signed the peace agreement with the rebels in Lome, Togo when the entire nation jubilated singing praises to God Almighty for bringing an end the brutal war.

Kono, referred to as the “bread basket of Sierra Leone” since the 1930s does not reflect in the District although the electrification project and reconstruction of the highway to Koidu is in progress.

The delegation toured the city monitoring development projects like electricity, road construction, the Kono Library and the Nafaya Bridge before holding discussions with Chiefs and stakeholders at the Town Centre.

Dianna Konomani, who was overwhelmed by the reception, acclaimed the people for the warm welcome.

Supporters were clad in different uniforms while traditional performances climaxed the event.

Statement on the declaration of th...