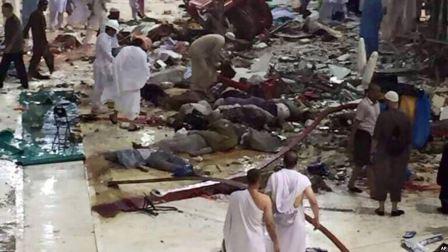 No Sierra Leonean has so far been reported to have been involved in Friday’s crane accident at the Grand Mosque in the holy city of Mecca.

Over 85 people are dead and over 200 injured, according to the Saudi civil defence authority’s Twitter posts.

Saudi Arabia suspended the issuance of Umrah and Hajj visas to pilgrims from Sierra Leone, Guinea and Liberia in 2014 due to concerns regarding the spread of the Ebola virus – but the ban has been lifted for Liberia which was recently declared Ebola free by the World Health Organization.

Inside the Grand Mosque

Although pilgrims are not coming from Sierra Leone this year, some Sierra Leone residents in the Kingdom of Saudi Arabia and others from different parts of the world are already in Mecca for this year’s annual Hajj pilgrimage.

Today’s tragedy comes days before the start of the Hajj which will see more than two million Muslims in this holy Kingdom.

Pictures circulating on social media showed pilgrims in bloodied robes and masses of debris from a part of the construction crane that crashed. The crash left piles of debris and jagged rubble.

Reconstruction work to enlarge the Grand Mosque had been ongoing for the past two years and was expected to be largely completed before this year’s pilgrimage.

Saudi authorities say extreme weather is likely the cause of the collapse, with heavy rain, lightning strikes and high winds hitting the Muslim holy city on Friday.

Yasmin: The next big thing from Si...