ACC takes the fight to concern worldwide in Magburaka 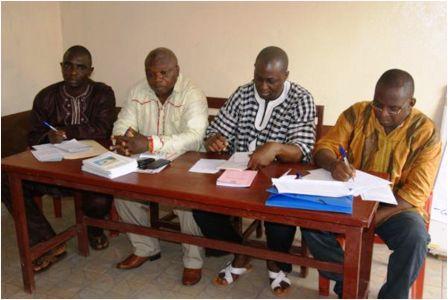 ACC takes the fight to concern worldwide in Magburaka

Enhancing transparency and accountability in the operations of Non Governmental Organizations continue to be a strategic drive by the Anti-Corruption Commission (ACC) in fighting corruption. It is in this regard that the ACC Northern Region Office held sensitization meeting with staff of Concern Worldwide on Friday 21st August 2015 at their Shammel Street Office in Magburaka.  ACC staff on the high table (from left to right)- Abdulai Saccoh- Public Education Officer, Augustine Ngobie -Public Education Officer, Joseph B. Noah- Senior Investigations Officer and Sahr Isaiah Suluku -District Coordinator, Tonkolili

Explaining the rationale for the meeting, ACC’s District Coordinator Tonkolili, Sahr Isaiah Suluku described the engagement as a show of commitment by the Commission to heighten public awareness on anti-corruption messages and garner support in fighting corruption. Suluku furthered that the meeting was intended to correct some of the misconceptions, misperceptions and misunderstandings about corruption and the activities of the Commission. Fighting corruption he noted must not be seen as the business of the ACC alone but the civic responsibility of all citizens. The Coordinator informed his audience that the 2008 Anti-Corruption Act covers all public officers including those working for charitable organizations whether local or international, because they handle public and donor funds/property. He encouraged them to show more commitment in combating corruption as poverty will continue to be entrenched if funds/property meant for the vulnerable people are diverted for personal use. Suluku implored staff of Concern Worldwide to serve as anti-corruption crusaders and help spread the message in their areas of operation.

Speaking on key corruption issues and mainstreaming anti-corruption measures into Non Governmental Organizations (NGOs) operations, ACC’s Public Education Officer Abdulai Saccoh applauded the management of Concern Worldwide for opening their doors to the ACC. Saccoh expressed appreciation for their interventions in the area of health and sanitation, education, security and Ebola recovery programmes and encouraged them to do more. The Public Educator underscored the significance of the meeting noting that it was geared towards enhancing transparency and accountability in public bodies. He noted that ACC is not a witch hunt institution but rather serving as a check on the excesses of public bodies. Saccoh indicated some of the corrupt practices that are prevalent in the operations of NGOs such as: soliciting 10% from contractors and vendors, inflating the number of beneficiaries per programme, short payment of participants during workshops and meetings, conniving with implementing partners to siphon donor funds, implementation of sub standard projects, duplication of projects in one area and favoritism in identifying project beneficiaries.

The Public Educator encouraged his audience to mainstream the following anti-corruption measures: introduction of conflict of interest rules, implement integrity testing, developing a robust human resources policy, introduction of integrity pacts to guide procurement and strengthen internal audit systems. Saccoh noted that the aforementioned anti-corruption measures should not be seen as an entrapment but rather an efficient approach to ensure judicious use of donor funds. Saccoh advised staff of Concern Worldwide not to engage in any act of corruption as defaulters will be severely dealt with as prescribed by the 2008 AC Act. He implored his audience to imbibe the values of impartiality, professionalism, integrity and selflessness in the discharge of their responsibilities. ”Combating corruption must be seen as a national duty; therefore the crusade should not be left in the hands of the Commission alone” Saccoh ended.

Dilating on the offences and penalties prescribed in the 2008 Anti-Corruption Act (AC Act), ACC’s Senior Investigations Officer Joseph Bockarie Noah stated that the Commission has a mandate to investigate instances of alleged or suspected cases of corruption referred to it by any person or authority which has come to its attention whether by complaint or otherwise. Noah emphasized that the meeting was not intended to intimidate them but to guide them, so that their activities would be devoid of corruption. The Senior Investigations Officer explained the distinction between the Audit Service and ACC noting that the former examines financial records while the later verifies them, investigates where discrepancies are detected and charge to court where necessary.

He disclosed that twenty seven out of the thirty two offences in the AC Act are in part four. Noah lamented on some of the offences that are likely to be committed by staff working at charitable organizations such as: corrupt acquisition of wealth; possession of unexplained wealth; offering, soliciting and accepting advantage; bribery, misappropriation of public funds/property; misappropriation of donor funds/property; abuse of office; abuse of position; receiving gift for a corrupt purpose; conflict of interest and protection of public property and revenue. He disclosed that the penalty for the aforementioned offences is a fine not less than thirty million Leones or to imprisonment for a term not less than three years or both fine and imprisonment. Noah also talked on offences relating to obstruction of justice, conspiracy to commit a corruption offence, impersonation and asset declaration noting that their respective penalties are prescribed in the Act.

In his statement on the roles of NGO staff in the fight against corruption, ACC’s Public Education Officer Augustine Foday Ngobie reminded them that though ACC has the mandate to lead the fight against corruption, it cannot succeed on its own without the support of the public. The Public Educator noted that their roles in fighting corruption is to resist, reject and report any act of corruption that they encounter during the course of their work to the Commission. He informed them of the various channels of reporting corruption such as in-person, letter, email and toll free numbers which was read to them: 077-985-985/077-986-986 or 161. Ngobie guaranteed his audience of confidentiality as information provided to the Commission cannot be divulged to anyone. The Public Educator cautioned them to refrain from making false and malicious reports as it constitutes an offence. Ngobie informed them about the 10% reward given to informants for reports brought to the attention of the Commission which are investigated with convictions gained in the court and recoveries made.

Earlier, in her statement, Concern Worldwide Area Programme Coordinator Ruth Davies Kpundeh heaped praised on the Commission for embarking on a public education campaign noting that it is an effective tool in changing people’s behaviour. Kpundeh assured the Commission of Concern Worldwide’s commitment in combating graft and strengthening their existing internal control measures in order to prevent corruption. She implored her colleagues to heed to ACC’s advice and work within the ambit of the law.

Presentation of information, education and communication materials and questions and answers session formed the high point of the engagement.