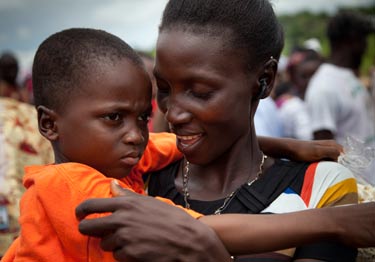 For the residents of one village, the end of quarantine brings joy and relief – but also uncertainty about what comes next.

LAYA GBORAH, Sierra Leone, 14 August 2015 – The closure of Camp Hope on 31 July in Sierra Leone’s Kambia district was cause for celebration – muted, yes, because Ebola is not yet defeated nationwide, but it was the end of quarantine facilities there for villagers who had potentially been exposed to the deadly virus. (Photo: A bittersweet reunion for Kadiatu Bangura and her 6-year-old son Ali Sesay on the day that Camp Hope, a temporary Ebola quarantine facility, closed down. Kadiatu had been separated from her child as she was a high-risk contact. She lost her husband and youngest child to Ebola.)

The district marked 21 days (the incubation period for Ebola) since the last identified case. The camp was a temporary tented facility for providing a quarantine area, set up by the Government of Sierra Leone, with the support of partners including UNICEF and WHO.

To mark its closure, the residents of Laya Gborah village, from where the residents of Camp Hope hailed, all gathered, and in the presence of elders, chiefs, religious leaders and traditional healers, publicly declared their commitment to ensuring Ebola would never enter their community again.

Camp Hope represented a unique achievement, as an entire village had voluntarily moved out of their homes, made inaccessible by a swamp, to stay in tents erected on the nearest plot of dry land. They had also worked together with Ebola response teams to make sure all persons who had come into contact with the initial Ebola case were identified and placed in isolation. Making sure that alert systems remain effective will be critical in keeping Ebola out of Sierra Leone in future.

“What is important here is that we succeeded in achieving community ownership,” said Delphine Leterrier, UNICEF Field Coordinator in Kambia district. “The entire community was involved. The chief and all the village members, including women representatives who were very strong, participated in the process.  It is exactly the kind of model that we want to replicate to have a sustainable alert system.”

Although there was much to celebrate on the occasion, for the last two residents, release was bittersweet. As the quarantine rope came down, Kadiatu Bangura lifted her 6-year-old son Ali Sesay and hugged him. It was the first time she was seeing Ali since the start of the village-wide lockdown, which had been triggered by his father’s death from Ebola. The local outbreak also claimed her infant son and her sister-in-law. Kadiatu and her husband’s brother were the last to leave Camp Hope.

“I am relieved because I will be leaving this place today,” said Kadiatu. “I am healthy, and my boy is healthy, and we are together again, so it is a good day. I lost my husband and youngest child, but with prayer, I have consoled my mind. I will now go home and be with my family.”

Rebuilding livelihoods disrupted by the disease is another looming challenge for Sierra Leone, where there have been 8,697 confirmed cases of Ebola as of 10 August, with 3,585 confirmed deaths from the virus.

For Kadiatu, restarting life after quarantine and the loss of her husband will take more than overcoming her grief.

“I don’t know how I am going to make my living when I leave here,” said Kadiatu. We made our living farming – growing corn, cassava, groundnuts and rice. As you can see, I have lost my husband. I will not be able to farm without him.  If I can get some start-up support, I would like to start doing petty trading. I will be able to earn my living that way.”

Those coming out of quarantine are given a package of items to help them restart their lives, including a mattress, clothes, kitchen utensils, a mat and blankets.

Development back on track

While getting to zero Ebola cases is the immediate priority, the Government of Sierra Leone is already preparing to resume its ‘Agenda for Prosperity’, the national development strategy that was suspended by the Ebola emergency. Three of the four priority areas identified by the Government for the transition period include: restoring access to basic health services, bringing all children back to school and protecting the vulnerable – areas in which UNICEF has committed to providing support.

In May 2015, the Government of Sierra Leone, in collaboration with the World Bank and UNICEF, launched a Social Safety Net programme, which will provide regular cash transfers to extremely poor households, including children, Ebola survivors, and other vulnerable people. Cash transfers will enable families to buy food, send children to school, protect assets such as livestock, and start small-scale businesses such as the petty trading that Kadiatu believes might be the best option for her.

UNICEF’s US$178 million appeal to respond to the Ebola crisis in Sierra Leone, remains underfunded, with $121.7 million received as of 22 July, leaving a funding gap of $56.3 million.