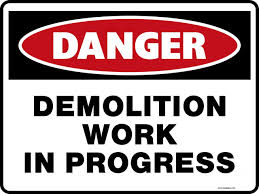 Demolition exercises are becoming highly risky nowadays, especially for those directly involved in the demolition of houses. There is the sad history of a very senior official in the Lands Ministry, Ken Moore, who was abducted and tortured to death.

On many occasions, demolition teams encounter violent resistance; a recent attempt to demolish houses around the Rokel area failed with armed police officers running away to save their precious lives from an angry mob that violently resisted the team.

The best government would have done was to prevent the illegal erection of structures on prohibited lands, if it had done that, there would have been no need for perilous demolition exercises. Where was the Lands Ministry when these illegal structures were being erected? While commending the Lands Ministry for the demolition of illegally built structures, I am advising the ministry to begin to take the preventive approach by preventing the illegal erection of structures.

It is rather unfair to for people to construct their houses in prohibited areas only for such houses to be later; thereby retrogressing and frustrating the owners. This can breed bad blood in society and contribute to the underdevelopment of the country.

There is also the need for more sensitization before demolition; people need to be properly educated on the advantages of demolition. This could prevent them from violently attacking demolition teams.

On the Rampant Lawlessness