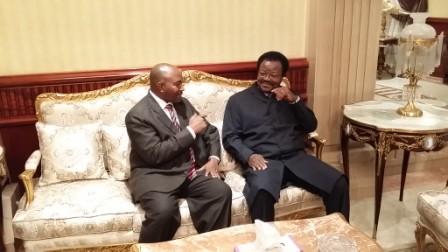 Last week, the Vice President of the Republic of Sierra Leone, Victor Bockarie Foh led a high-profile delegation to the Arab Republic of Egypt for the official launching of the over $ 8-billion New Suez Canal project in the Egyptian port city of Ismailia, which serves as the shortest route from the Mediterranean Sea to the Pacific Ocean. (Photo: VP Foh (right) responding to questions from Saudi Press Attaché)

As the Press Attaché based in the Kingdom of Saudi Arabia and also accredited to Egypt, my Ambassador, Alhaji M.S Kargbo and his team joined the Sierra Leone delegation in Egypt where I had the opportunity to conduct an interview with the Hon. Vice President for the second time since his appointment in April this year.

From the wealth of experience I have gathered over the years, I had to wait for the right moment to capture the thoughtful attention of the Vice President. In his usual confident and circumspect manner, he wasted no time to delve into a detailed-driven explanation of several national issues that covered Post-Ebola Recovery Plans for the entire Mano River Region.

Vice President Bockarie Foh’s wealth of administrative experience was evident when he started by expressing appreciation to the countries and organizations which came to the aid of the three countries: Sierra Leone, Liberia and Guinea, at a historically needy moment of great suffering, sickness, death and fear over the contracting of the deadly virus.

He disclosed that the Government of Sierra Leone has taken several moves to consolidate its Post-Ebola Recovery Plans which have already started bearing fruits. According to the Vice President, conferences have been held over the last three months to find ways of supporting the three countries comprehensive recovery agenda. One of such conferences was the 3rd Extraordinary Summit of the Mano River Union held in Conakry on the 28th of June, 2015 that adopted the Sub-regional Post-Ebola Socio-Economic Recovery program, the priorities and costs of the Sub-regional Ebola-Recovery Program, as well as the International and Financial Framework to ensure effective implementation.

“You know it has been extremely difficult to combat the virus, but President Koroma – internationally acclaimed for his astute leadership qualities – didn’t leave any stone unturned to ensure that Sierra Leone emerged victorious over the Ebola which is almost over now,” Vice President Foh said.

He dilated on the overwhelming challenges brought about by the Ebola outbreak in almost every aspect of life, particularly the health sector which he said, almost collapsed when the epidemic struck. He lamented on the notable decline in the projected economic growth from 11.3% to 6%, which resulted in the regrettable decrease in revenue as a result of the shutting down of many Government revenue sources, while farming activities were abandoned completely due to restrictions enforced to contain the spread of the disease.

The Vice President however expressed projected optimism towards the International Community and other development partners who have shown determination to support the country’s Post-Ebola Recovery Plans that would undoubtedly help Sierra Leoneans to overcome the numerous challenges posed by the outbreak. He said the Post-Ebola Recovery Plans will be reintegrated into the President’s ‘Agenda for Prosperity.’ He believes that, based on the lessons learnt during the outbreak, the country’s national Post-Ebola Recovery Plans will be enacted adequately but with stronger emphasis laid on the health sector which almost collapsed under the enormous pressure of the patients’ demands.

“We had few medical facilities and health personnel when the outbreak struck and we lost over two hundred health workers in less than one year including prominent medical doctors and nurses,” the Vice President recounts, adding, “I believe with the efforts of President Koroma’s Government, the International Community and other development partners will play a role in providing health and other related personnel to get our health centers to operate in full strength in the short run, and also support training of nationals to occupy available positions in the long-run”.

Vice President Foh took the message of Sierra Leone’s Post-Ebola Recovery Plans to Egypt where he met and discussed with several world leaders that attended the official launching of the Suez Canal.

“In my discussions with several world leaders, I tried to rebrand my country to attract more profitable investment and other opportunities for recovery and growth so that we can get back as quickly as possible to where we stopped before the Ebola outbreak.”, he emphasized.

“It was a great opportunity for me to interact with some of these world leaders I never met before, and I used that opportunity to market our national Post-Ebola Recovery Plans to them. I surely expect positive response from some of these leaders and senior government and superintending officials”.

He disclosed that in the last week of August, another conference for Post-Ebola Recovery Plans will be held in the United Kingdom to find more ways of supporting Sierra Leone to recover from the Ebola outbreak, noting that more Post-Ebola recovery conferences are expected to be held to keep the Government of Sierra Leone on track with the recovery program as victory over the deadly scourge is now on sight.

The second gentleman of the country urged Sierra Leoneans in the Diaspora to help their country recover from the tragedy. And on his relationship with the President, Vice president Foh described His Excellency Dr. Ernest Bai Koroma as a God fearing Leader that has respect for hard-working Sierra Leoneans bearing the vision to serve their people selflessly. He dilated on the President’s patriotism, generosity and love for mankind as the driving force behind his successful leadership.

“My relationship with the President has always been very cordial and he knows me for what I am because we are both comrades in our beloved Party, the All People’s Congress (APC)”, VP Foh reiterated.

“I believe he appointed me as Vice President because he knows we can form a very formidable working relationship so as to achieve our goal of making Sierra Leone a better place for all Sierra Leoneans.”

He also lauded the decision by President Koroma to represent him in Egypt for the official launching of the extension of the Suez Canal. Before he departed the shores of Egypt, the Vice President addressed the Sierra Leonean community in that country through their leader, Ishmael Tarawallie, an MA student of Languages and Translation at Al-Azhar University.

In his address, he admonished those who have completed their courses to return home and help the Government develop the country for the good of every Sierra Leonean. He also entreated Sierra Leoneans out there to remain law-abiding.

The Vice President also explained the state of the current Ebola fight and assured that victory is almost in sight. He appealed for their contributions to the national Post-Ebola recovery program.