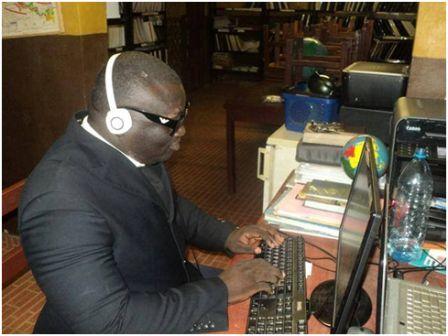 Chairman of the Sierra Leone Union of Musicians (SLMU), Mr. Christopher Alie Conteh, during a brief interview with Mohamed Bangura, aka King Milan, calls on every musician in the country to be united at this crucial time that the people emerged from an untold suffering of the Ebola scourge if the current issues that affect a clear benefit in the entertainment industry are to be solved. (Photo: Christopher Alie Conteh, Chairman, Sierra Leone Musicians Union)

Conteh made this disclosure during a recent interview with King Milan on Sierra Leone Music Mix on the nation’s national broadcaster SLBC 99.9FM.

According to the chairman, who also doubles as a music studio engineer and producer, the products of musicians and dramatists in the country can only realize the kind of dividend when legal structures, plans and a proper implementation of these plans is in order. Adding, entertainment as an industry is capable of building revenue for the development of any nation and Sierra Leone in particular.

“We should not only rely on the incumbent government to bring us our expectations, doing what is convincing for any investor and the government to play their own role in complementing our efforts should be taken note of”, he stated.

Alie Conteh further disclosed that he has been a key player in the production of songs of many successful musicians in the country and that he has been embedded the responsibilities as chairman of the interim body of the Sierra Leone Musicians Union to help encourage these popular musicians to reason and reconcile under the SLMU and bring smiles in the faces of artistes in the country.

Humbly born and raised in the north of Sierra Leone, in a surrounding village of Yilleh town, in Tonkolili district by his late father Alie Conteh and mother Adama Conteh, the musician revealed that he acquired his inspiration at blind school in the western part of Freetown, through the help of their principal Sam Campbell, who also gained knowledge from his studies in Ghana and made music a part of every student in the Milton Margai School for the Blind, adding that the role played by the head of the school and the support of the students springs admiration from other disabled nationals who were part of them, to establish music in their respective institutions in their countries.

Conteh calls on the attention of media practitioners to help bring to light issues within the entertainment industry in the country, adding, this will encourage investors and members of the government to help address these issues that will ease tension on youth unemployment and poverty in the country

Where is the Road Safety?