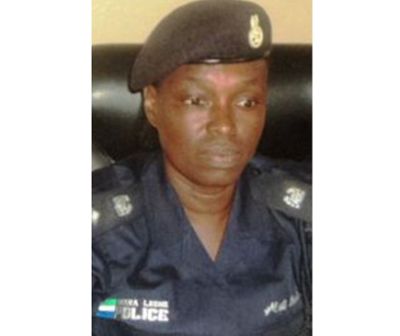 She made the condemnation on Saturday, July 25th, at the Laura Dove Secondary School at Dan Street in Freetown while delivering the Keynote address during an inter-area meeting organized by members of the Local Police Partnership Board (LPPB) in collaboration with the Sierra Leone Police, Harbor Division.

Recalling that during the Ramadan month, many devout Muslims going for special prayers at night were robbed by faceless robbers often harbored by community people.

AIG Memuna warned all the criminals in the area to stop their diabolic activities as in the next week, the SLP will be launching a massive raid in the area and many lawbreakers may spend the next Islamic festivity behind bars.

She commended young men and women of the Harbor Division for facilitating the work of the police, and admonished parents and guardians not to hide bad people in their homes to avoid Police confrontation.

The Police Commander also raised concern over the mushrooming of commercial bikes along Kissy Road; a situation which she said is largely responsible for the constant traffic congestion along the busy road.

In another development, Mr. Koroma is also reported to have taken over the land matter between people of Worreh Makankry who the Local Court Chairman at Pad Lap town ruled against and Issa Kalokoh of Robarrie village who the chairman said is the true owner of the disputed land which the Law Officer has commenced by condemning the old witnesses of both sides and called for other fresh witnesses that believe to be sharing boundaries between the two neighboring villages for the dispute to finally settle amicably.