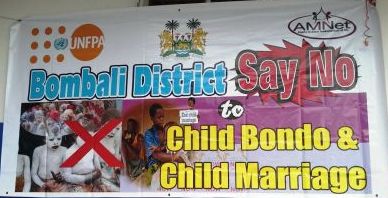 In collaboration with the Ministry of Social Welfare, Gender and Children’s Affairs and the United Nations Fund for Population Activities (UNFPA), the Advocacy Movement Network (AMNET) has succeeded in banning child marriage and child initiation into Bondo Society in the entire Bombali District.  (Photo: Traditional chiefs and soweis have promised to ban FGM for underage children in Pujehun)

According to the Chief Executive Officer of AMNET, Hawa Samai, all the Paramount Chiefs in Bombali District yesterday, July 6th, signed an agreement making it a punishable offence to allow children to undergo Female Genital Mutilation (FGM) and early marriage.

The historic signing ceremony, she said, took place at the Centre for Democracy and Human Rights (CDHR) Hall along Kabala Road in Makeni where the Ministry of Health and Sanitation, the Ministry of Education, Science and Technology and other line ministries including local councils were in attendance.

The AMNET Chief Executive Officer informed that all the Paramount Chiefs wholeheartedly appreciated the ban and pledged to help enforce it to the fullest in their respective chiefdoms and to prevail on the local councils to incorporate it into their bye-laws.

Hawa Samai further disclosed that AMNET and its partners have also succeeded in imposing the ban in ten districts including Bo, Bonthe, Pujehun, Kailahun, Kambia, Koinadugu and Portloko Districts.