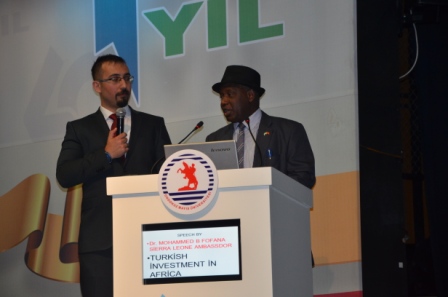 Sierra Leone’s Ambassador Extraordinary and Plenipotentiary to the Islamic Republic of Iran and accredited to Turkey and other Asian countries has told Turkish Investors to take advantage of the numerous investment opportunities in West Africa.

His Excellency, Ambassador Dr. Muhammed B. Fofana was addressing investors in the Turkish Black Sea Region of Samsun Wednesday, 13th May, 2015 where he was honoured as Guest Speaker for the West African Countries in an International Conference titled: “The Turkish Investment Partnership and Educational Relations in Africa” organized and hosted by the prestigious Ondokuz Mayis University.

The Ambassador urged the investors to invest in West Africa, while assuring them of a massive turnover on their investments. He said the West Africa Sub – Region as a whole and Sierra Leone in particular offer huge opportunities in the Mining, Agriculture, Energy, Telecommunications, Aviation, Tourism, Infrastructural Development Sectors, among many other investment opportunities.

“Most of our economies are doing well. We have some of the fastest growing economies in Africa and they are strong and resilient,” he said. The Ambassador, therefore, told the gathering of Turkish Chief Executives of Multinational Companies to increase the level of their investments across the continent in order to spur up growth, fight poverty and create employment.

He also urged developed countries to promote investments in Africa instead of providing aid for the continent. He said through investment in the private sector, the region can achieve real growth and development.

The Envoy said there is low knowledge level about opportunities and the true position of things on the continent, saying many investors rely on hearsay for their facts about the continent. Africa, he reiterated, has emerged as an investment destination for a number of reasons, including its abundant natural resources and improving economic indicators.

On the Ebola Virus Disease which has had a great impact on investments in some West African states, President Koroma’s envoy said, that has given rise to many concerns in the business community.

“This is understandable. But Ebola should not be considered a West African disease. It is an epidemic that we, as an entire world, must work together to end,” he pointed out.

The diplomat also hastened to inform his audience that Ebola is almost becoming a thing of the past in the West African sub-region. The World Health Organization, Dr. Fofana said, recently declared Liberia free from the Ebola, adding that, Sierra Leone and Guinea are registering tremendous successes in the fight against the virus.

The Sierra Leone top diplomat in Iran said the two countries have started recording zero cases following the robust social mobilization drive employed by their leaders and their stern warning against complacency. He cited the re-opening of educational institutions in these countries as a major step in the post Ebola recovery process, and appealed for more International support.

For his country, the Ambassador said, Sierra Leone was fast becoming one of Africa’s investment destinations. Sierra Leone, he assured, is a stable country where the rule of law, transparency and good governance are “held sacred.”

“We want Turkish investors to know that Sierra Leone is safer for investment with improvements in law, governance, human rights and social services.”

My President, Dr. Ernest Bai Koroma, the Ambassador said, is one of the few Presidents in the world who drives himself around and walks around the streets of the capital waving to his people. “This is how safe the country is. What more can you ask for in creating a stable environment?” he asks.

Sierra Leone, he told them, is one of the finest countries in Africa. “She is blessed with the second largest natural harbour on earth after Australia. Sierra Leone is remarkably beautiful, with pristine beaches, green mountains, and jungles that remain largely untouched. It has friendly people with political and religious tolerance”.

He furthered: “We have over 400 kilometers of white sandy beaches, just waiting to be developed for tourism. The country offers a fantastic coastline that houses magnificent 5-star hotels with exceptional hospitality so reminiscent of the country’s culture and tradition”.

Turkish Investors, he said, should, therefore, take advantage of the different investment opportunities that abound in Sierra Leone today – from Mining to Infrastructure, Agribusiness to Renewable Energy, Tourism to Fisheries and much more economic potentials.

The Ambassador said that the government had also evolved programmes and policies aimed at attracting investors to the country. The Ambassador was accompanied to the conference by Sozer Ozel, Sierra Leone’s Honorary Consul General in Ankara, Turkey.

Turkey, over the years, has been able to diversify its trade options to Asia, America and more significantly, to Africa. Professor Mehmet Bozoglu, Vice Dean, Department of Agricultural Economics at the Ondokuz Mayis University said, Turkey is at the “Point of no Return” in the region, and its opening-up to Africa should be supported for the country to reach “the strategic place Turkey has drawn for herself as a global player in world affairs.”

Turkey, according to its Foreign Office, has opened 27 more Embassies in African countries since 2002, mainly in the Sub-Saharan region – a signal of its diplomatic focus on the continent. Turkish Foreign Direct Investments to Africa reached $6 billion in total up to 2014, according to Turkish Foreign Ministry data.

The Foreign office also says Turkey-Africa relations gained a substantial momentum since the declaration of Turkey as a strategic partner of the continent by the African Union in January 2008.

“Turkey has also given further boost to its Africa. We may describe this boost as one wherein relations have been transformed into a mutually reinforced Political-Economic Partnership,” the Ministry said in a statement recently.

The Foreign Ministry also says that Turkey gives around 500 scholarships annually for students from Africa. It said around 200 Junior Diplomats have attended training programs organized by the Turkish Diplomatic Academy of the Ministry of Foreign Affairs since 1992.

Turkish Airlines, an Istanbul based Aviation Specialist said, is considered to have a key role in the growing Turkey-Africa ties through flying to 46 destinations in 28 countries across the continent.