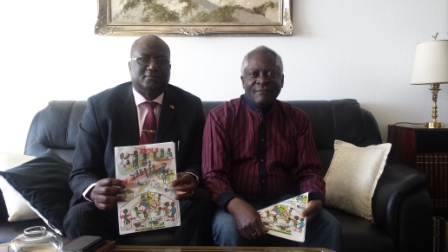 In a joint effort to further mobilise resources and medical equipments towards the fight against the Ebola Virus Disease in the country, Sierra Leone’s Ambassador to the Federal Republic of Germany, Jongopie S. Stevens in collaboration with the African Cultural Institute in Berlin have secured a consignment of Immediate Family Protective Equipments (IFPE).

The equipments worth thousands of Euros have already been sent to Freetown through the National Ebola Response Committee (NERC).

According to the president of the Cultural Institute, Prof. Dr. Charles Yankah, his organisation in collaboration with the Liberian and Sierra Leone Ambassador to Germany, organised a donation campaign to acquire the protective equipments. This was after he (Professor Yanka) realised that there is no available drug to treat the Ebola Virus Disease so far. He believed that the distribution of Family Protective Equipments among communities in Ebola affected countries is a right approach to prevent the disease from spreading.

He further explained that the equipments are specifically meant for the initial stage of Ebola infections and immediate protection of families who are taking care of the patient before taken to the hospital.

“The equipments will be distributed by health care personnel/medical students to families in both rural and urban areas,” he noted and added that while the protective gears will serve as a deterrent to the spread of the disease, education about hygiene and the source through which the virus emanated from is a key in the fight against the disease.