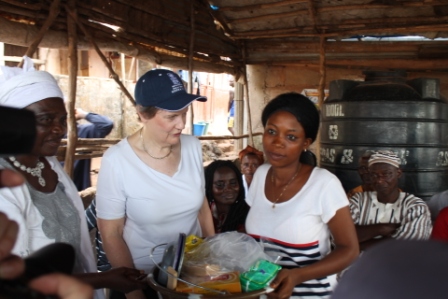 Freetown, Sierra Leone, 18 February 2015 – At the end of a seven-day visit to Guinea, Liberia and Sierra Leone, the three epicenter countries of the Ebola outbreak in West Africa, UNDP Administrator Helen Clark said that moving to zero cases of the disease must remain the top priority response to the outbreak.

Helen Clark spent the past week holding discussions with government ministers, UN agency representatives and international partners and meeting affected communities in the three countries. She left deeply impressed by the critical role communities continue to play in stopping the outbreak.

“Without community engagement and empowerment, the behavior changes required to stop the outbreak would not have occurred,” she said.

She noted that there were significant needs arising from the prolonged crisis which has had wide-ranging economic and social impacts.

Many people have had not had access to essential services – for example, lifesaving medicines like antiretroviral drugs for people living with HIV, immunization childbirth support, and education. Many children have been orphaned, and more households are now women-headed. The needs of vulnerable groups need to be prioritized. There has been a disproportionate impact on women which needs to be recognized in the ongoing response to Ebola.

“The UN Secretary-General has tasked UNDP with leading the UN system’s response to the recovery from Ebola”  Helen Clark told reporters at her press conference in Freetown, Sierra Leone, at the end of her visit.

It is important now for the international community to “stay the course” in stopping the outbreak and on supporting recovery from its consequences. Helen Clark noted that three forthcoming international meetings – in Brussels, Washington DC and New York – each provided a platform for the epicenter countries to articulate their needs now and going forward, and for partners to indicate how they intended to continue to contribute. “It will be important that planning for recovery is closely linked to national development agendas,” she said.

During her time in Sierra Leone, Helen Clark met with President Ernest Bai Koroma to discuss the significant effort still needed to stop Ebola in the country, and his government’s thinking on the road back to development beyond the crisis.

She also met with Ministers, development partners, UN colleagues, and with residents of the Grey Bush and Congo Town informal settlements in Freetown to see how their communities had acted to prevent the spread of Ebola. UNDP has been active in supporting volunteers in these communities to sensitize people on the behavior changes required, and in directing support to people with disabilities.