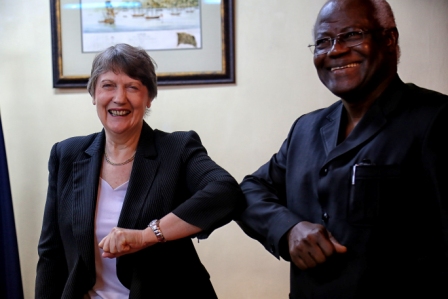 During her time in Freetown, Ms Clark met with His Excellency President Ernest Bai Koroma to discuss the last push to get to zero Ebola cases and UNDP’s role in that fight during the transition into the recovery period.

“UNDP has been tasked by the UN Secretary-General to lead on the recovery, but everyone has their role,” Ms Clark said. “I go away with the impression that this (getting to zero cases) is doable.”

Encouraging the international community to “stay the course”, she said that three key international meetings were on the horizon that would be decisive in shaping the recovery priorities for the Ebola-affected countries. A March meeting in Brussels would be an opportunity to look at, among other things, reconstruction efforts in each of the three countries. The conference would also be a chance to see how such efforts could be incorporated into the countries’ own national development agendas and aspirations, Ms Clark said.

The April meeting of the World Bank and IMF in Washington DC, and the UN Secretary-General’s proposed pledging conference toward the end of May were further key milestones for national governments and international partners to lay out longer term recovery plans.

“We must make sure that development setbacks are not allowed to take hold”, Ms Clark said. “These countries must be supported to come back better, stronger and more resilient to future crises, including possible future outbreaks of Ebola and other communicable diseases.”​​

While in Freetown, Ms. Clark walked through Grey Bush and Congo Town communities; a visit that brought home the challenges facing Sierra Leone’s most vulnerable people. Buffeted between the ocean and the city dumpsite, the two communities face extreme risk to the Ebola virus. But with a strong community sensitization, supported by UNDP, Congo Town, a community of 25,000 people, have so far escaped without any cases of Ebola. For Grey Bush, a similar population, there were less than ten deaths.

The Administrator heard first-hand the way Ebola directly impacted this fishing community from the loss of livelihoods to the perils of sick people trying to land in the coastal community under the cover of darkness.

Helen Clark also met with a group of people with disabilities who spoke about how they were overlooked by regular Ebola-prevention messaging. One visually impaired woman explained the importance of touch; avoiding body contact is just not possible. UNDP helped the community develop and deliver tailor-made Ebola messaging in Braille and sign language thereby linking the overlooked with life-saving information.

“Without the community buy-in, wouldn’t be where we are today. It’s truly grassroots. When we unleash energy like this in the community, we can’t put it back in the bottle,” Helen Clark said.

Her visit to Sierra Leone was part of a one-week call on the three most-affected countries by the Ebola virus disease: Guinea, Liberia and Sierra Leone.

As part of the overall response, UNDP’s recovery initiatives are focused on four pillars: economic opportunities and jobs; recovery of the health system; resilient governance for recovery, peace and stability; and risk management to deal with any future outbreaks.

Moving to zero cases must still be...