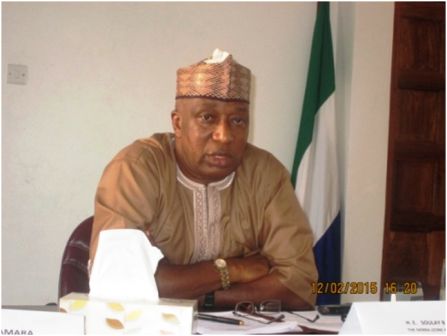 The Embassy of Sierra Leone in The Gambia in partnership with the Gambian Ministry of Health and in collaboration with the affected Mano River Member States Secretariat had put together a TASK FORCE to host an International Forum on EBOLA outbreak in West Africa next month.

The theme of the Forum, according to the Head of Chancery Andrew Kamara, would be ‘Ebola, Biological injuries, its Aftermath strategies for Development , Ebola Orphans and stigmatization.

According to the Conference Moderator, Augustine Smith, the Embassy saw it fit to form RESCUE SALONE to look out for and secure funding to help in the fight against the Ebola virus. “Our aim is to ‘shake the waters’ and see what would come out” he said.

Explaining the reasons behind the planned International Ebola Forum to members of the Press at a Press Conference Organized by the Embassy at its Bijilo Chancery, AMB Daramy  said the Forum among others aims to debate the Mysteries, wild guesses, conspiracy theories, marginalization of local ideas and mobilize a Mano River Member States Task force through the Mano River States Secretariat in Sierra Leone, to monitor what is considered the experimental and potential dangerous use of drugs and other related safety  issues.

The Head of Mission, further added that the Forum will also strengthen public awareness campaign to eradicate Ebola and support Ebola orphans well being and security in partnership with the Mano River Secretariat in Sierra Leone. “We will use the platform to further inform the world about Ebola and how it is tackle and prevented” he said. “Fortunately” he pointed out “the virus is diminishing”

AMB Soulayman Daramy informed that at the end of the International Forum, its outcome will be a signed Communiqué that will be presented to the Mano River Union Secretariat in Freetown and ECOWAS in Abuja, for immediate action and continuity with Mano River EBOLA Task Force in The Gambia and Diaspora.

Invited participants for the upcoming Forum would include among others, the Ambassador of America to The Gambia and the British High Commissioner to the Gambia and Mr Abdul Tejan Cole, Director of SOROS West Africa based in Senegal.