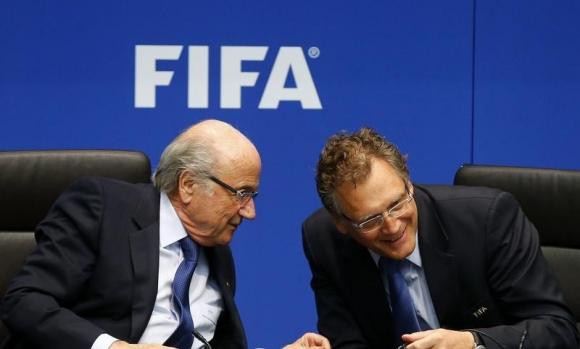 FIFA has given Sierra Leone the final chance to avoid a “lengthy” ban that would prevent the country from returning to active football. (Photo: FIFA President Sepp Blatter (L) talks to FIFA Secretary General Jerome Valcke)

It would also mean Sierra Leone is thrown out of every football activities from CAF and FIFA and none of the countries national or club teams would be able to play in international tournaments under suspension.

The ongoing bickering in Sierra Leone football between Isha Johansen’s administration and it affiliates has been well over months.

Responding to www.footballsierraleone.net the World Governing body stated in their correspondence that they are not recognizing the so-called stakeholders and have issued their final warning.

“FIFA doesn’t recognize the members of the so-called interim body and this was notified to them. In addition, please note that we haven’t been officially informed of the Ministry initiative and therefore cannot comment further.”

And in their final warning signed by Secretary-general, Jerome Valcke, the governing body in their reply to Director of Sports Saidu B Mansaray National Sports Council they added,

“We must stress that should the authorities not consider our position and persist in recognizing the outcomes of the so-called Congress of 20 December 2014, it will be considered as interference in violation with articles 13 and 17 of the FIFA statutes which request the member association to manage their internal affairs independently and with no influence from third parties.

“We will then have no choice but to refer the case to the appropriate FIFA organs for a suspension of the SLFA. It would mean that the SLFA would be prevented from benefiting from and development or financial program of CAF and FIFA and all sports contacts with the FIFA Members Association would be prohibited.

FIFA reiterated that, “The Suspension would be lifted only when the situation would come back to what was prevailing before the sanction (recognition of the current board).”

Furthermore, FIFA stated “We acknowledged of your correspondence dated 20, December 2014 with regards to the SLFA members the resolutions of 20th December 2014 and we have duly taken note of its content.

“We enclose for your kind attention the correspondence which we sent to the Sierra Leone Football Association (SLFA) on the 2 December 2014 in this regards. We clearly stated that we would not recognize any outcome because of in compliance with statutory provisions (e.g consultation of the members through phone contacts).

“We wrote that we had taken note that SLFA had convened a congress on 30 and 31 of January 2015, the health situation permitting and we said that it would be then the appropriate place for the legitimate of SLFA members to raise any concern.

“Our position was clearly re-affirmed to Mr. Alhaji Alim Sesay who decided to go ahead despite our stands. In the same correspondence, we stated that we were recognizing Ms. Isha Johansen as president of the SLFA and Mr. Christopher Kamara as general secretary.

SARS: Lessons from another deadly...

Orange, title partner of the Afric...