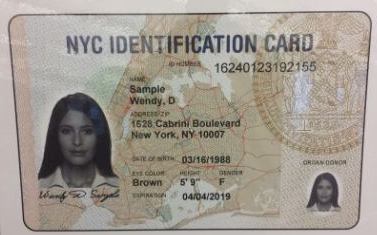 New York City Mayor Bill de Blasio fulfilled a central campaign promise Monday when he handed out the first municipal ID card (IDNYC) the largest identification program of its kind in the country – at the public library in Flushing, Queens.

The launch of IDNYC, which came six weeks after city officials announced full eligibility criteria and privacy policies will benefit an estimated half a million undocumented New Yorkers who do not have proper identification to access city services including hundreds of African immigrants whose Temporary Protected Status (TPS) have expired.

Officials say IDNYC will also benefits every city resident, including the homeless, youth, the elderly, the formerly incarcerated and others who may have difficulty obtaining other government-issued ID.

“I am pleased to announce today that we are truly delivering on the most ambitious municipal ID card program in the country, built with the best technology, secured with thoughtful privacy protections, and accessible to the widest cross-section of individuals.” We want New Yorkers to feel proud to carry this card in their wallet, but also to feel confident knowing that their information is safe and secure,” Mayor de Blasio said in statement.

Prior to the launch of IDNYC, New York City Commissioner of Immigrant Affairs, Attorney Nisha Agarwal during an interview told No Questions Asked Radio show listeners over on WBAI, 99.5 FM in Manhattan, that at least for the first year the ID card will be totally free and expire after 5 years.  She said based on the rules of eligibility, In order to get the card, applicants will be required to present proof of identity and proof of residency in New York City and then the card will be mailed to you once the application is complete and has been reviewed. The minimum age to apply is 14 years of age.

“There is obviously, the very basic benefits of having an ID card that you can show the police or if you need to show a school official to go pick up your kids from school.  There are additional benefits that we announced such as free membership at 33 leading cultural institutions.  If you sign up for every single benefit, it would be something like a savings of $2,000 for families who want to use the Zoo, Botanical Garden and museums,” Commissioner Agarwal acknowledged during the radio interview.

“I think this is very important to emphasize to the community who are nervous about the ID card that there have been several executive orders that were issued by the Commissioner of the Human Resources Administration (HRA) which is the agency that is administering the IDNY.  The executive orders make a few things very clear: Information that individuals provide regarding IDNYC will not be shared, protected to the maximum extent of the law,” Commissioner Agarwal said.

She said if there is for an example a court order requesting that information, there would still be a process in place to ensure that cardholder’s information will never be shared and it will go through a rigorous process of assessment and approval.

City officials say IDNYC will cost $8.4 million for 2015 fiscal year and about $5.6 million annually in the years after.