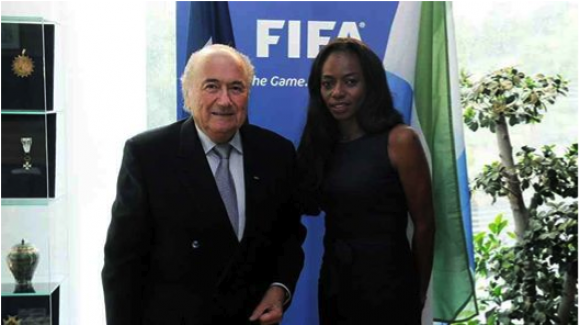 In a scathing attack on Isha Johansen’s administration addressed to General Secretary, Jerome Valcke the veteran football administrator, Sesay explained why FIFA has no right to support Johansen’s executive and stated the stakeholders’ decision will never be reverted.

Sesay said, “I acknowledged receipt of your letter of 8th January 2015, the content of which has been read and fully understood. Unfortunately, it does appear from the said letter that you have neither understood the facts on the ground nor the legal provisions governing the operations of the SLFA.

“I will take the liberty of laying them out for you clearly in the hope that FIFA would be saved the embarrassment of propping up an illegitimate entity. The facts are that until it was constitutionally removed in December 2014, the former administration of Isha Johansen had been an abysmal failure and a disappointment to our football-loving nation. The Catalogue of failure includes.

1. Failure to organize the National Premier League competition.
2. Refusal to convene a Congress in the second quarter of 2014 as required by the SLFA Constitution.
3. Levying of unsubstantiated allegations of match-fixing against executive committee members.
4. Arbitrary change of the official SLFA logo and other unauthorised conduct.
5. Extremely poor performance of the national football team at international competitions.

The founder and owner of Premier League club, Anti Drugs FC further noted that: “The membership of SLFA which constitutes the Congress would have been remiss in its constitutional duty if it had delayed taking the action it did on the 20 December 2014.

“Our actions comply with the provisions of 2012 SLFA Constitution. The Membership of SLFA comprises the 14 premier league clubs and the four regional associations. This body is the supreme legislative and highest decision-making authority of SLFA. It has the power among others to dissolve the SLFA executive committee (arts 10, 20 and 22).

“Ordinary Congress shall be convened by the Executive Committee annually in the second quarter of every year (art 26).”

“Members may request the convening of an extraordinary congress but if the Executive Committee fails to convene it, the requested members may convene the Congress themselves (art 28).”

“The Art.17 par 3 of FIFA Statue talks about the membership and we are the bona-fide members of the SLFA, we own the SLFA and we have spoken and nothing will change our decision,” Sesay noted.