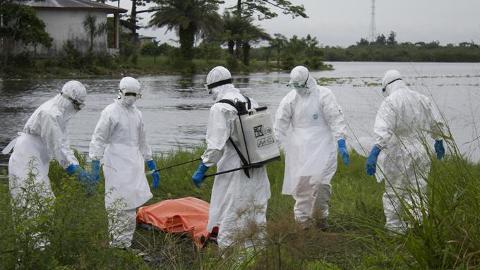 9 December 2014 – The United Nations, working with its national and international partners to halt the Ebola outbreak in West Africa, is currently focusing attention on bringing down the high levels of transmission in western Sierra Leone and ensuring that cases do not cross the border from Guinea into neighbouring Mali, the UN Special Envoy on Ebola Dr. David Nabarro said today.

Dr. Nabarro also told a press conference in Geneva that the national response, with support from the international community “is right, is working, and real progress is being made.”

He later briefed by video link the Council on Foreign Relations in Washington, D.C. and told members debating the response to the Ebola outbreak that he believed the needed capacity should be in place in the three most affected countries of Guinea, Liberia and Sierra Leone by the end of January next year.

Meanwhile, in a message to a special meeting of the Association of Southeast Asian Nations (ASEAN) on Ebola preparedness in Bangkok, Thailand, the head of the UN Mission for Ebola Emergency Response (UNMEER), Anthony Banbury, drew attention to the need for more international responders as part of the district-by-district strategy.

“We need logisticians, information management people, we need epidemiologists,” Mr. Banbury said. “In this war that we are fighting now, our most valuable soldiers are epidemiologists, people who can understand this disease, who can help us hunt it down, who can work in the villages and identify any new outbreak so that we can quickly respond and bring it under control.”

Back in Geneva, Dr. Nabarro, specified two areas of particular concern in the current battle to eradicate the Ebola in West Africa.

The first area of concern, Dr. Nabarro said, was western Sierra Leone, in particular, the capital Freetown, and Port Loko, where there are high levels of transmission and “a much more intense response” is needed.

He did say that some of the most experienced Ebola responders in the world were working in that area, together with UNMEER’s “Western Area Surge team,” the Government, the UN World Health Organization (WHO) and partners to ensure there were enough beds and burial teams.

The UN envoy explained the logistical difficulty of staffing the Ebola treatment units with 300 beds that require some 300 people. The staff needed to change shifts every three to four hours because of the heat of the protective clothing, and each changeover was a dangerous moment, as was each interaction with patients, particularly with needles.

The second concerning area, Dr. Nabarro said, is the northern part of the interior of Guinea, known as Guinea Forestiere. “UNMEER is also working very closely with Mali to ensure cases do not cross the border and if they do, that they could be dealt with very quickly,” he said, noting that he had been working closely on that with the President of Mali, as well as with the UN peacekeepers stationed there.

On a positive note, Dr. Nabarro drew attention to a the N’Zerekore Treatment Centre in Guinea headed by a doctor from Niger, which he described as “a truly extraordinary” example of international, African and local cooperation, built with money from the European Union and constructed in 25 days of 24 hour shifts by the UN World Food Programme (WFP) with Red Cross volunteers and others there.

Stressing that “communities are at the heart of the response,” he said “You couldn’t do this without local community involvement.”

Dr. Nabarro said he is very pleased with the response from the UN family, as well as the global response. Regarding Africa’s response, he said African countries, small and large, have rallied their resources to fight the epidemic that has affected 17,800 people and left 6,331 dead.

“All the people needed to be skilful teachers because increasingly the whole effort was to teach national personnel, medical and non-medical,” he said. “People who had worked on infectious diseases, particularly in developing countries, and people who could stay for three months or more, were particularly wanted.”

In his message to the ASEAN ministers meeting on Ebola preparedness in that part of the world, UNMEER’s Mr. Banbury referred to the experience of Southeast Asia with SARS and noted how “preparedness is absolutely essential to protect the citizens of those countries, to protect the economies and to protect the regions and the world as a whole.”

He also said what is lacking in the response are trained epidemiologists to work in the field, and he urged ASEAN countries to send health care works to fight Ebola in West Africa, saying that would not only help to quickly bring the outbreak to an end, “but it also helps spread critical experience and expertise that can be part of preparedness measures for the future.”

Sierra Leone reacts swiftly in the...