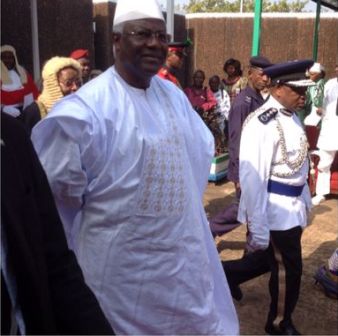 President Dr. Ernest Bai Koroma addressing Sierra Leone House of Parliament at State Opening of the 3rd session of the fourth Parliament of the second Republic of Sierra Leone.

This time last year, we did not have an Ebola outbreak; and no one in the whole world thought a deadly virus like this would strike our sub region and cause so much tragedy, disrupt so many plans, and put at grave risk the very survival of our nation. This time last year, Sierra Leone won high praise and acclamation around the world as a country transforming itself into a model of post war recovery, a country registering sterling economic growth, a country improving its scores on most indices of governance, peace, investor confidence and democracy. This time last year, thousands of our compatriots from the diaspora were trooping to this nation of their birth, most of them confident that the country was opening up to its great potentials. There were many challenges, but the country was moving on with a zeal that never tires to assert the better aspirations of our people.

Africans in Australia set for a bi...