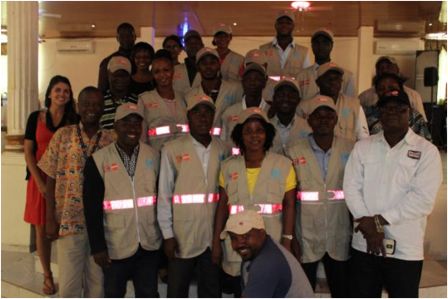 UNFPA conducted a two-day Orientation Workshop for fourteen newly recruited District Contact Tracing Monitors that will be deployed in all the districts of Sierra Leone to support Government’s effort in mitigating the Ebola Virus Disease. The overall objective of the workshop was to orient the new staff members on their roles and responsibilities in the districts and on the structure and mandate and of UNFPA in Sierra Leone. The workshop took place at the Njala Venue, Freetown, on the 14th and 15th November 2014.  (Photo: New UNFPA staff pose with old staff)

In formally opening the workshop, Mr Ibrahim S Kamara, the UNFPA Assistant Representative welcomed the new staff members and admonished them to go to the field as Ambassadors of the organization, collaborate with other agencies and the DHMTs in a transparent and accountable manner. He further wished them well in their new postings.

The participants expressed their deep satisfaction over the knowledge gained on their new roles and made a firm commitment to do their utmost to live up to expectations. Rosaline Bockarie, one of the newly recruited District Contact Tracing Monitors, appreciated the training by saying that, “The training has helped us to better understand what we are expected to do in the field and will also help us to work closely with the DHMTs”. Further orientation sessions were held in the UNFPA Conference Room in Freetown on 17 & 18th November during which the new officers were introduced to the UNFPA Representative Dr. Bannet Ndyanabangi. He used the opportunity to enlighten them further about the mandate of the organization and his expectations. He encouraged them to be proactive, timely, work in teams and do quality work. respective duty stations from Monday 24th November, 2014.

With support from UNDP, The Office...