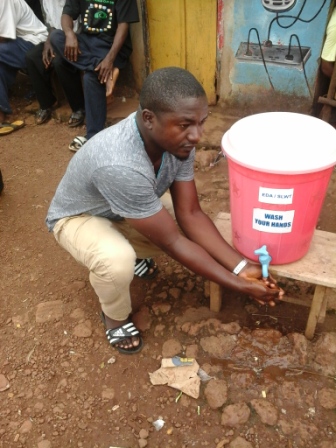 Like all the markets in Freetown, it’s business as usual at the Calaba Town market along the long stretch muddy Main Motor Road in east end Freetown; a scene that contradicts the picture being painted by the international media of a country gradually succumbing to an outbreak of the dreaded Ebola Virus Disease-EVD. The market is so busy there is hardly any room for vehicles to go through.  Sensie Magnus performs daily Ebola prevention ritual before joining his colleagues at the Friendship Ataya Base

At the Friendship Ataya Base, perched in one corner, a group of young men share their views- truths and myths- on the most topical subject in the country at the moment, Ebola, while sipping ataya from tot cups. One of the men is busy on his mobile phone; his expression suddenly changes, along with the mood in the Ataya Base, as he stands. He has just received news of the death of a 64 year-old man down the road.

To the Calaba Town community Marnus M. Kamara (commonly known as Sensie Magnus) is like the widely publicized free toll 117 Ebola response call center. He’s alerted of every death occurring in the community. He leaves the Ataya Base hurriedly with his mobile phone still cling to his ear.

Sensie Magnus is the Founder/Head of the Red Dragon Youth Organisation, comprising young volunteers in the fight against the spread of the EVD in Calaba Town. In less than 15 minutes, he and his Red Dragon volunteers arrive at the residence of the deceased at 18 Robis Road. Their job includes counseling the family, neighbors and sympathizers to keep away from the corpse and stay calm while they await the arrival of the authorized burial team.

The deceased, Mohamed Samba Bah, had been sick for about 20 years from pneumonia and suffered paralysis in his last eight months, according to a family member. However, all deaths in Sierra Leone are now treated as Ebola-related and go through all procedures for safe burial. Health officials recently found out that unsafe burials account for a high percent of Ebola cases in Sierra Leone.

The Red Dragons will be around until the burial team has carried out all safety rituals, including disinfecting the whole house, and taking the corpse away. They will come back the following days to monitor the family, ensuring that they stay indoors until their late loved one is cleared by the health authorities as a non-Ebola case.

Of the about 48 deaths reported so far in Calaba Town since the Ebola outbreak in March this year, Sensie Magnus says the Red Dragons have been directly involved in facilitating safe burials for 38.

When they are not responding to distress calls or monitoring Ebola-infected households, the Red Dragon volunteers solicit Ebola outreach materials and embark on sensitizing the community.

“We emphasize the practice of basic hygiene habits like regular washing of hands with soap, and the ABC (avoid body contact) prevention anthem,” says Sensie Magnus, adding that sometimes they even have to counter myths held by some people about Ebola. “Some people have been led to believe there is a mass grave at the Kingtom Cemetery where they bury the dead during this Ebola crisis, but we keep assuring the bereaved families that it is not true and that their loved ones are buried respectfully with all rituals observed,” he continues.

Despite what he describes as selfless service to their community and country, Sensie Magnus says they are often accused of receiving monies from government for their work.

“This is our own initiative to help,” he says. “We are not covered by any special government budget whatsoever. In spite of our financial challenges, we are motivated by love for our people and country.”

Furthermore, Sensie Magnus says they have also endured stigmatization from community people. “At the initial stage of our involvement, people avoid us in fear that we carry the EVD since we are regularly involved in burials and visiting infected family homes,” he says, adding however that there is now some level of acceptance for their voluntary work.

The Red Dragon Youth Organisation was born out of the Red Dragon Karate School of 35 Main Motor Road, Calaba Town, according to Sensie Magnus, with the objective to bring young people of the community closer to God, and to empower them through skills training, sports and entertainment.

Unfortunately, this objective has been dealt a huge blow by the Ebola outbreak. Following the declaration of a public health emergency by the government, social and educational activities have been banned. Schools and colleges are closed. Recreation centers are prohibited from operating. Sports and entertainment activities are forbidden. For the Red Dragons there are no more karate sessions as well.

“We understand the circumstances,” say Sensie Magnus. “Our situation is desperate, and if that’s the price we have to pay to rid our country of this dreadful disease so be it.”

Nevertheless, in the absence of all their past time activities the Red Dragon volunteers find fulfillment in what they do.  “We are very proud of what we do,” says Sensie Magnus. “We want young people in other communities to copy our example.  We are willing to even go to other communities to talk to our colleagues and inspire them.”

As he leaves the bereaved home at Robis Road after the departure of the burial team, Sensie Magnus’ phone rings again. A six month-old baby has just passed away, reportedly from fever.