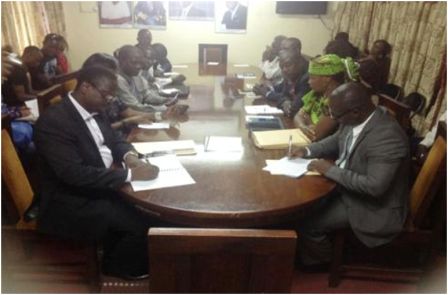 In a bid to continue strengthening its partnership with civil society organisations, the Anti-Corruption Commission (ACC) on Thursday 20th November 2014 signed a Memorandum of Understanding (MOU) with the child advocacy organisation, Every Child Matters Sierra Leone (ECM-SL). Welcoming members of the organisation at the ACC’s Gloucester Street Head Office in Freetown, the Director Public Education and Outreach, Koloneh Sankoh said corruption tramples upon the rights of everyone, especially the vulnerable. She said it is good that the organisation is partnering with the ACC to address issues of corruption, especially those affecting the wellbeing of children.  (Photo: Cross section of the audience at the signing ceremony of MoU between ACC and ECM-SL)

The Executive Director of ECM-SL, Abdul Karim Koroma said his organisation was formed in 2004 to promote the rights of children, youths and women and foster the values of transparency and accountability in the country. He said the organisation has been moved by the work of the ACC, which has been very effective in combating corruption in order to enhance the wellbeing of the citizenry. Mr. Koroma said they would assist the ACC with its public education drive by educating young people to change their mindsets and imbibe a life and culture of integrity.

The Deputy Commissioner of the ACC, Shollay Davies, said the ACC takes the plight of children very seriously, which is why the Commission has been working-through its ‘Meet the School Campaign’ to enlist school pupils in the fight against corruption and to develop corrupt-free minds. He said “to advocate for the rights of children is to advocate for a brighter future for the nation”. Mr. Davies said the ACC believes in the objectives of ECM-SL, something he said is the major driving force to form a partnership with the organisation. The Deputy Commissioner encouraged ECM-SL to be reporting acts of corruption to the Commission as they go about implementing their programmes.

The MOU calls for the development of a “synergy of cooperation and partnership between the Public Education and Outreach and the Monitoring and Evaluation Departments of ACC and ECM-SL respectively; and share common platform on public education, customized community and town hall meetings.”

The signing of the MOU by the Deputy Commissioner on behalf of the ACC and the Executive Director of ECM-SL on behalf of his organisation climaxed the event.