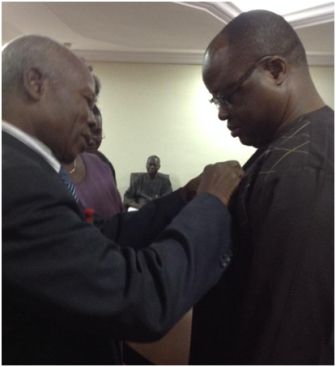 In his remarks, the Co-Chairman of the Ex-Servicemen Association, Mr. Rashid Thomas said that the association was pleased to decorate the Vice President not only in his current capacity as Vice President but also as a senior honorary member of the Association.

He said Alhaji Chief Sam-Samuna was the first ever Vice President that started laying a wreath at the war graves.

He maintained that the Association was also pleased with the government for gracing the occasion irrespective of the on-going health crisis in the country. The Poppy Day, he said, will be celebrated in a low key by inviting fewer people and putting on less performance in honor of the dead and planting of the wreath.

In his response, Vice President Sam-Sumana expressed his profound gratitude to the association and committee for their relentless effort in the preparation of the remembrance of the falling heroes who lost their lives while in active service.

He said as time passed and fewer veterans still alive, it became increasingly important to demonstrate that they remembered their sacrifices, adding that the day was also a time to show respect for those who continued to fight wars around the world.

He said the government through the leadership of His Excellency, Dr. Ernest Bai Koroma do recognized the efforts of all the forces in the country and every Sierra Leonean in their tremendous effort to give peace a chance not only in the country but to other nations around the globe.

He, however, reminded the team to be mindful of the current health crisis, Ebola, which the government and international partners are trying to eradicate in the country in particular and the region as a whole.

He called on all Sierra Leoneans to stay fixed to the safety precautions put out by the health ministry in the fight in order to win the Ebola war.