Homepages
Your trusted place for Sierra Leone and global news
Trending News
HomeFeaturedAs BKPS struggle to provide power in Kenema and Bo, ACC customizes with its management staff in Kenema

As BKPS struggle to provide power in Kenema and Bo, ACC customizes with its management staff in Kenema 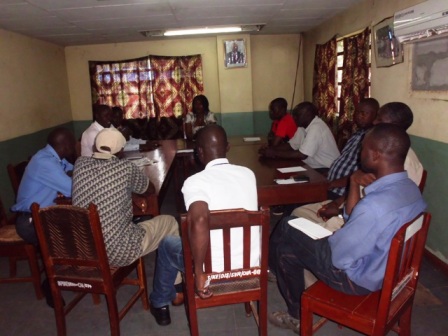 As BKPS struggle to provide power in Kenema and Bo, ACC customizes with its management staff in Kenema

Despite the ravaging effects of the Ebola pandemic in Sierra Leone, the ACC still continues to play its supervisory role aimed at enhancing the delivery of much needed services by key MDAs. On Tuesday the 28th of October 2014, staff of the Kenema Office of the ACC engaged the management of the Bo/Kenema Power Services in a customized sensitization meeting, to discuss the challenges faced by the public body in the sustainable provision of much needed power for the public. In declaring the purpose of the meeting, The Kenema District coordinator of the ACC stated that the services provided by the BKPS are fundamental to the development of this nation especially in moments like this when the country is at a critical period. Blake continued that the declaration of the public health emergency was never a suspension of the Anti Corruption Act of 2008 neither the operations of the commission, adding that the commission was resolved more than ever before to ensure the adequate functioning of MDAs and to confront corruption in all its forms.

Sylvanus Blake explained the crucial nature of the services provided by BKPS and encouraged them to be up to speed in disseminating vital information to the public on their operations and challenges. He thanked the management of the BKPS for the adherence to the provisions in the citizens’ services delivery charter that was developed by the ACC.

Mr. Emmanuel Farma, Assistant Operations Superintendent of BKPS in highlighting the challenges of the BKPS, thanked the ACC for the venture. He stated that the BKPS had four operational units that used to produce 6 megawatts of electricity. However in the past, two out of the four unit’s broke down and has still not been repaired, which drastically reduced the power supply to 2.5 megawatts for the two cities of Bo and Kenema. With growing demand for power, Emmanuel stated that the 2.5 megawatts is being rationed between Kenema and Bo. He stated with regret that just a couple of days ago, 1 unit out of the 2 went out again, which left electricity generation in an even more precarious situation. He stated that the units would have been repaired but for the Ebola situation which has made it difficult for the Chinese contractors to visit Sierra Leone and commence work.

Emmanuel however stated that the authority’s engineers were working round the clock to repair the one unit which went out and for now power was being rationed on six hourly bases between Kenema and Bo with priority given to the Government hospital which is to have power at all times. He stated that the thermal engines in Bo were not yet in use due to some technical hitches. He stated that the plan by government to unbound the NPA/BKPS to private energy sources by December this year. This plan if well implemented by the Energy Distribution and Supply Authority (EDSA) will to a very large extent help to ease the power situation.

Mr. Juana Fangawa the Assistant Distribution Superintendent of BKPS made similar statement and added that Kenema has been allocated five transformers which will be installed in areas with low power voltage like Dauda Town, Samai Town, Deima, etc upon arrival. He thanked the consumers for promptly reporting power outages in their communities to the BKPS and encouraged them to continue. Sylvester P. Silma the BKPS Surveyor added that the authority had just completed a detailed analysis of the challenges in the power sector and is set to improve on the power supply upon the availability of resources.

Mr. Felix Kabba Head of the Investigations Unit in the East thanked the BKPS management for their relentless efforts to provide power despite the daunting challenges as highlighted. He encouraged the authority to keep to the pace and maintain public trust. He entreated his audience on some corruption issues and encouraged them to be role models as line managers of various units. He mentioned pressure, opportunity and rationalization as some of the root causes of crime that encourage people to flout policies and procedures. The meeting was chaired by the Personnel Manager of the BKPS Md. Issata E. Kallon.