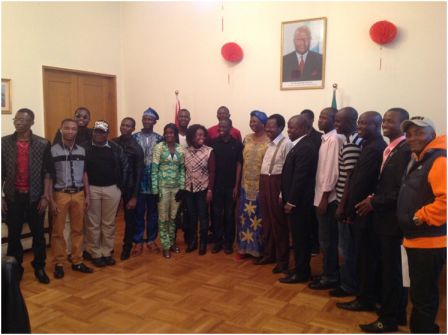 The Government of the Republic of Sierra Leone, through the Ministry of Finance and Economic Development and Ministry of Education, Science and Technology has effected payment of the 2013/2014 Students Personal Annual Allowances to the tune of One Hundred and Eighteen Thousand United States dollars (US$118,000) to Sixty-Six Sierra Leonean students who are pursuing various courses of study in the People’s Republic China.  (Photo: Cross section of students recently during a meeting at the Embassy)

The Sierra Leone Embassy in Beijing, People’s Republic of China is currently disbursing this entitlement to the 66 listed students.

Commenting on the Remittance, His Excellency Ambassador Victor Bockarie Foh thanked the Ministries of Finance and Education for facilitating the payment “at this very crucial time of our country’s Ebola Tragedy. This is indeed a demonstration of President Ernest Bai Koroma’s government’s concern for education at all times and even during this period of the cruel and unforgiving deadly Ebola epidemic ravaging our people and our country.”

Ambassador Foh commended “the Ministers of Finance and Education for not relenting even though Ebola has brought untold hardship to the Sierra Leonean people and the entire government machinery.”

Ambassador Foh seized the opportunity to thank the Government of the People’s Republic of China for its continued support to Sierra Leone especially in the fight against Ebola and at the same time, building Sierra Leone’s human resources. He expressed optimism that with such support and more coming from P.R.China and the entire International Community, Sierra Leone will surely put the Ebola chapter behind and the country’s development agenda will be put back on track sooner than later.

Student Secretary, Adikali Sesay expressed appreciation to both the government of Sierra Leone and that of the People’s Republic of China for their support to students. He made a commitment for and on behalf of all Sierra Leonean students in P.R.China that they will always be law abiding, take their studies seriously and return home to contribute to national development.

Prior to 2007, students were paid less than $ 500 per person as Annual Personal Allowance. This was increased to the current amount of $ 1,800 per student when President Koroma assumed the Presidency in 2007 and appointed the Honorable Minkailu Bah as his Minister of Education.

School children in Sierra Leone re...