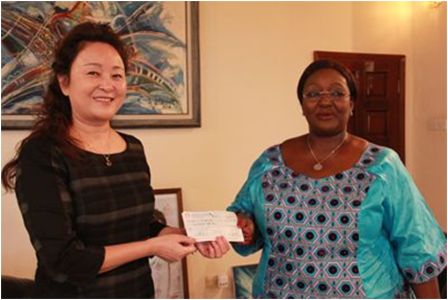 Madame Mao stated that Ebola is still rampant in Sierra Leone, and the country is facing daunting challenges in containing the deadly disease. Many families in the isolated districts and health workers working in the frontline of the fight against Ebola are facing food shortages and other difficulties. She commended the First Lady’s efforts on caring about the welfare of the isolated families and health workers, and stated that China always stood with Sierra Leone and would like to provide necessary assistance whenever needed. She hoped that her donation would strengthen people’s confidence in containing Ebola.

Mrs. Koroma highly appreciated China’s timely assistance to help Sierra Leone fight against Ebola, and expressed her gratitude to Madame Mao’s donation for helping the people in need. She indicated that China is an important partner of Sierra Leone, and believed that, with the support from China, Sierra Leone will surely win the battle against Ebola at an early date.

“No fine against Africell” NATCOM...