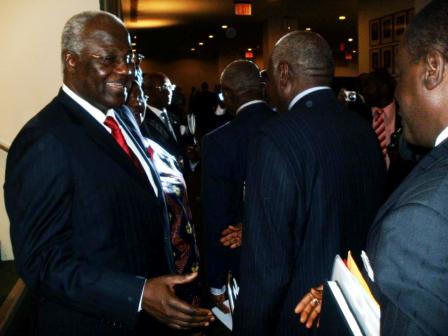 The president will again forgo a vital world summit due to the Ebola disease outbreak which the Centers for Disease Control (CDC) says Sierra Leone has a total of 1673 total case count, 1513 laboratory confirmed cases and 562 deaths as of September 18, 2014.

In a statement issued via email by National Publicity & Outreach Coordinator in the Office of Government Spokesperson, Abdulai Bayraytay said it is improbable that President Koroma will attend the UNGA General Debate.

“The honourable minister of information and communications Alpha Kanu has just informed me that it is highly likely that President Koroma may not attend this year’s UN General Assembly.”

The announcement came four days earlier before a three-day lockdown began Friday to enable health workers to curb the spread of Ebola.

On July 31, President Koroma declared a state of public emergency in response to the Ebola epidemic outbreak where he announced the “Cancellation of all foreign trips by ministers and other government officials except absolutely essential engagements.

However, this declaration will not apply to the Sierra Leonean delegation attending the 69th UNGA General Debate next week in New York.

According to Mr. Bayraytay “the travel restrictions for ministers will continue to be in place. He will give executive clearance to those attending instead.”

Some members of the Sierra Leonean community in New York were hoping that after the disappointing and lethally inadequate response to the Ebola disease by the international community, President Koroma should have seized the opportunity presented by the UNGA General Debate to plead his case for badly needed equipment, resources and qualified health officials to help battle the Ebola crisis.

Samuel Koroma, a Sierra Leonean professional living in New York says, “He is not surprised but disappointed that the president of Sierra Leone who is to highlight the severity of the Ebola crisis to othe world leaders will not attend the UN General Debate Sixty-Ninth Session.”

In addition, “The gains would have been far reaching and beneficial to the citizens of Sierra Leone, for example as the president of Sierra Leone he could have presented his case to the world stage for a more strategic and a comprehensive structured plan on how to combat the Ebola epidemic,” Koroma said.

But Mr. Bayratay said President Koroma “will continue to appeal for a more robust support in the fight against the ebola through the UN and other multilateral humanitarian agencies.”

Statement by the Secretary-General...