Freetown- (10 September 2014) – London Mining is pleased to announce the donation of an additional Le 400 million (US$ 92,000) to help the Government of Sierra Leone in its efforts to combat the spread of the deadly Ebola Virus Disease (EVD). This amount brings the total donation by London Mining – as part of the Company’s ongoing support to its communities, local authorities and government in their fight against EVD – to Le 709 million (US$ 165,000).

Commenting on the Company’s latest gesture, London Mining’s Managing Director, Dan Desjardins, said, “London Mining continues to be at the forefront of supporting the government and the communities in our fight to stem the spread of the disease in the country. We have not only contributed money for much needed education and equipment, but we have also provided training to nurses at the St. John’s Hospital in Lunsar, amongst other initiatives. With all our strength, we plan to continue to operate and support the fight against EVD in order to be a partner with the people of Sierra Leone during this crisis and into the future.”

In July, the Company also donated Le 45 million to the Government of Sierra Leone, through the Ministry of Political and Public Affairs, and a further Le 70 million to support the Port Loko District Health Management Team Ebola Response Plan, through the Marampa Chiefdom Health Committee and Paramount Chief Bai Koblo Queen. In Port Loko District the funds were used to support public campaign to educate and sensitize communities on the Ebola disease, to provide sanitation and personal hygiene education, and on public information materials.

Meanwhile, London Mining employees have volunteered to complement the Company’s efforts by making personal financial contributions to the ongoing anti-Ebola effort. This voluntary contribution will be presented to the Government of Sierra Leone on behalf of the London Mining workforce.

London Mining is an expanding producer of high specification iron ore concentrate for the global steel industry and is focused on identifying, developing and operating sustainable mines. London Mining commenced production from its 100% owned Marampa Mine in Sierra Leone in 2011, producing 3.4Mwmt/a in 2013 and plans to expand the mine to a capacity of 6.5Mwmt/a. Marampa, which directly employs nearly 1,300 nationals, has sufficient resources to support a staged expansion to 20Mwmt/a. London Mining has also completed bankable feasibility studies outlining plans for a further 20Mwmt/a of iron ore production by developing mines in Greenland and Saudi Arabia. The Company listed on AIM in London on 6 November 2009. It trades under the symbols LOND.L (Reuters) and LOND LN (Bloomberg). More information about London Mining can be found at www.londonmining.com.

Thou Shall Eat Foundation on Ebola... 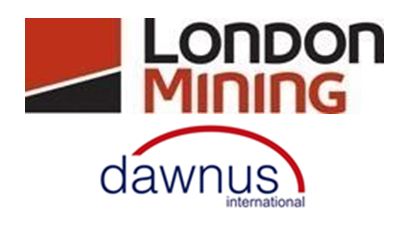