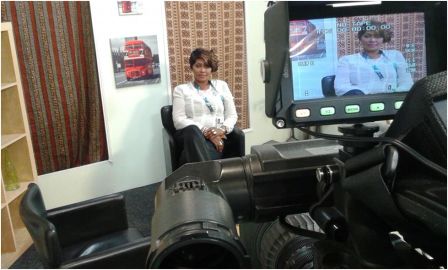 Founder and Chief Executive Officer Disabled International Foundation Sierra Leone (DIF-SiL) Imambay Kadie Kamara was on Saturday August 2nd this year hosted on SKY 102 British television program where she joined Sierra Leone and the rest of the world to put hands on deck to ensure that the Ebola Virus is eradicated in the West African regions of Sierra Leone, Liberia, Guinea and Nigeria.

She disclosed that the Ebola virus had claimed the lives of many including doctors and nurses in the country as health workers are at high risk of contracting the virus mainly as a result of lack of proper protective gear. She called on all concerned organizations, diasporas and friends of Sierra Leone to help the government in kind or cash so as to fight contain the Ebola disease in the country.

The Ambassador and multiple award winner also attended and provided financial support to the Sierra Leone delegation at the Commonwealth Games in Glasgow.

Speaking to this medium from Glasgow, Imambay Kadie Kamara disclosed that it was a pride to be part of the country’s delegation to the Commonwealth Games, adding that she is proud to be flying the Green, White, and Blue flag which indicates that as a nation we cannot afford to be left out of every competition. She called on the Ministry of Social Welfare Gender and Children’s Affairs, The National Commission for Persons with Disability, and the Sierra Leone Union on Disability issues to step up awareness raising campaigns in disabled communities to ensure that the right preventive measures are communicated to them.

DIF-SIL Expresses Gratitude to the Presi...