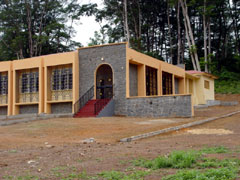 39 year old Fatmata Mansaray of the Rural Training institute (RTI) Tissor, Kenema, has been sentenced to jail for 6 years with no alternative by Judge, Hon. Justice Mange Deen Tarawallie of the High Court, Kenema for stealing a child.

Mansaray stood trial for one count charge of child stealing contrary to section 56 of the offences against the person’s act 180. According to the particulars of offence, the accused person on Wednesday, 10th April, 2013 at Kenema in the Eastern province of the Republic of Sierra Leone stole three day old baby girl from one Mamie Moijueh, the lawful mother.

The matter was prosecuted by Aiah Allieu Senior, State Counsel.

According to the particulars of the offence, the accused person on Thursday, 10th July, 2014, at Bandama check point maliciously wounded female police constable, 13558 Rebecca Brima, while executing her lawful duties. On the same day and at the same place, the accused assaulted and also obstructed woman police constable 13558 Rebecca Brima while on duty.

The matter was prosecuted by ASP Sahr Didi Lahai of the Legal and Justice Support Department at the Kenema Police Station.

The agony of a nation (acknowledgm...