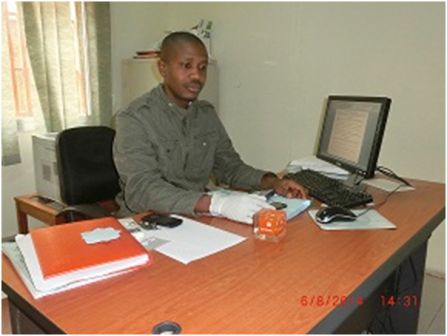 The branch manager of Guarantee Trust Bank (GTB) Kenema city eastern, Sierra Leone, Abu Bakarr Turay, has assured customers in and out Kenema City of joining hands with the Government of Sierra Leone and the Ministry Health in the fight against Ebola in Kenema city and the country as whole. (Photo: The Branch Manager GTBank Kenema )

Speaking to a cross section of journalists from various media houses in Kenema, at his Hangha road office, Turay said his institution is joining hands with the government of Sierra Leone through the Ministry of Health and Sanitation by engaging staff in the use of chlorine and that as an institution they have a bucket filled with chorine water where in each every one entering and leaving the bank washes his/ her hands, and that he has instructed his staff to avoid the exchange of pens or any materials brought in by customers rather than the ones provided by the bank.

The GTB Branch Manager admonished and assured all customers that GTB Kenema City is always open the general public, adding that the Automated Teller Machine (ATM) system of collecting money from GTB is always in operation, before urging the general public to fully make use of the system and encourage all customers that have not collected their ATM card to check at the bank now.